When I go camping, I often don't have a destination in mind. I'll fly north until civilization ends, and then I'll fly another hour and start looking for potential camping spots on Crown Land.

Backcountry camping is typically done in provincial parks, such as Algonquin, or on Crown Land. Crown Land is land owned by the government. Much of the land north of cottage country is Crown Land.

I always start my day early when headed on an exploratory adventure. If I haven't found a spot and don't have my tent set up by late afternoon, then I know it's going to be trouble. On this particular day, I headed to the airport at 5am to ensure that I had enough time to explore and find a perfect spot to land the plane and set up camp. 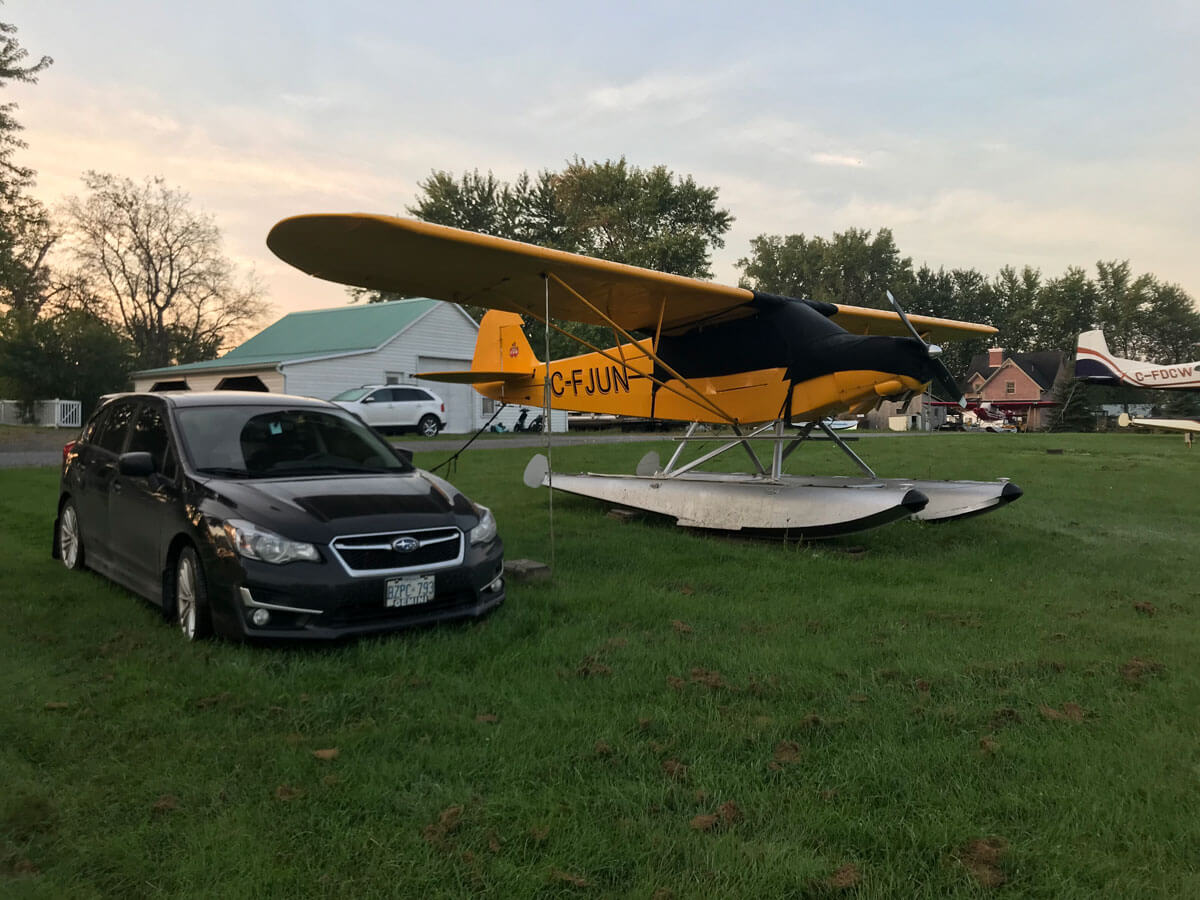 The drive to the airport is the easy part – it's not a far drive and I get to park right beside my plane. It's surprisingly quite a bit of work to get the plane prepared and moved from the grass into the water. It takes about 90 minutes of packing, prepping, and moving the plane into the water using a tractor before we are ready to go. While I'm doing all that, Maverick is either off swimming or chasing geese at the airport. Once the plane is in the water, and I've located Maverick, then it's time to go flying! 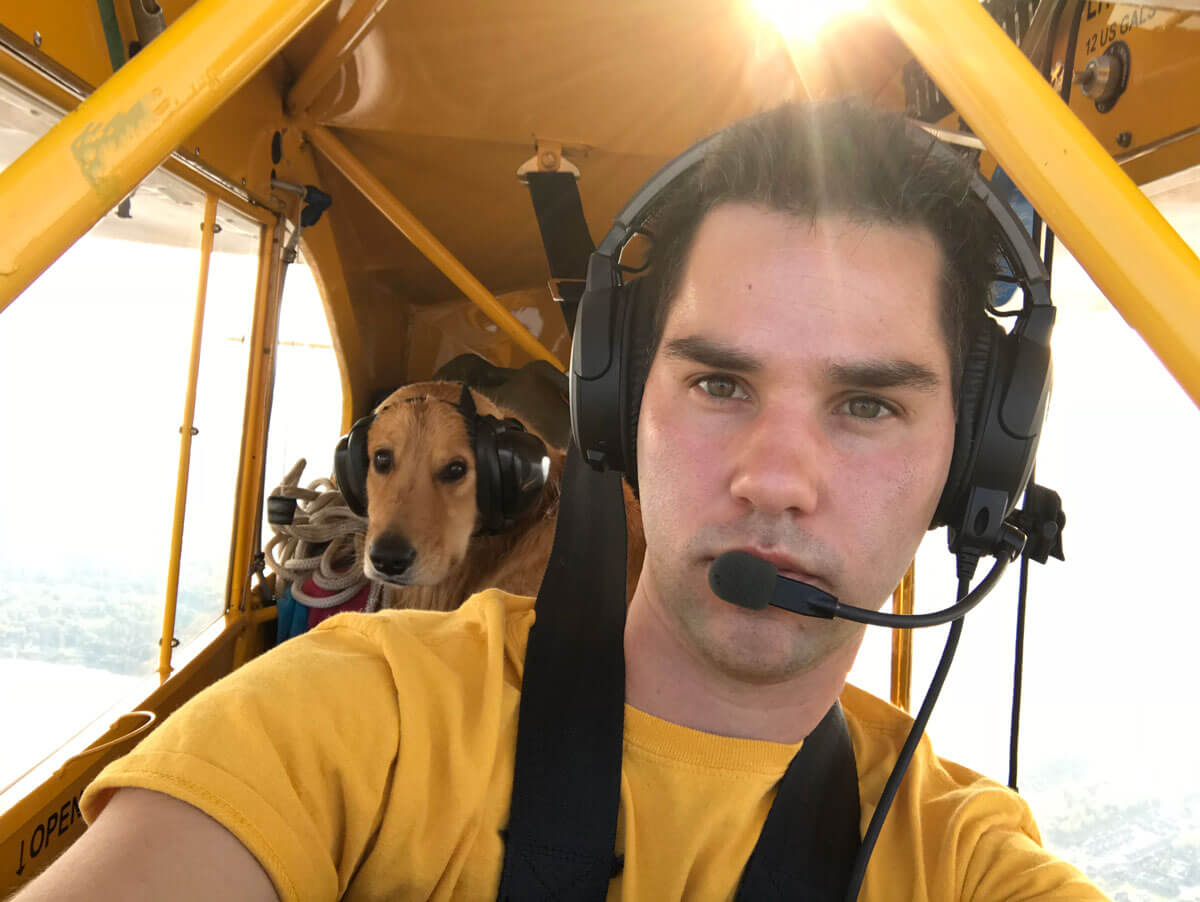 I started looking for potential camp sites only a few hours into the flight north as I was only camping for the weekend on this trip. Prior to even thinking about where I can pitch a tent, I am looking for two things:

Nothing beats fishing in the no access lakes in the remote north, which is why I am always spotting boats from the air and marking them on Google maps for further exploration later. It's actually not uncommon to see a boat out there – they're pretty easy to spot from the air. These boats have either been flown in strapped to a larger plane, such as a beaver, or dragged in via snowmobile in the winter.

More importantly, I had to find somewhere to park the plane where I would be comfortable leaving it overnight. I was eyeing a couple beaches; one of them was on an island on a long skinny lake, the other was tucked into a beautiful cove on a medium sized lake surrounded be elevated trees. 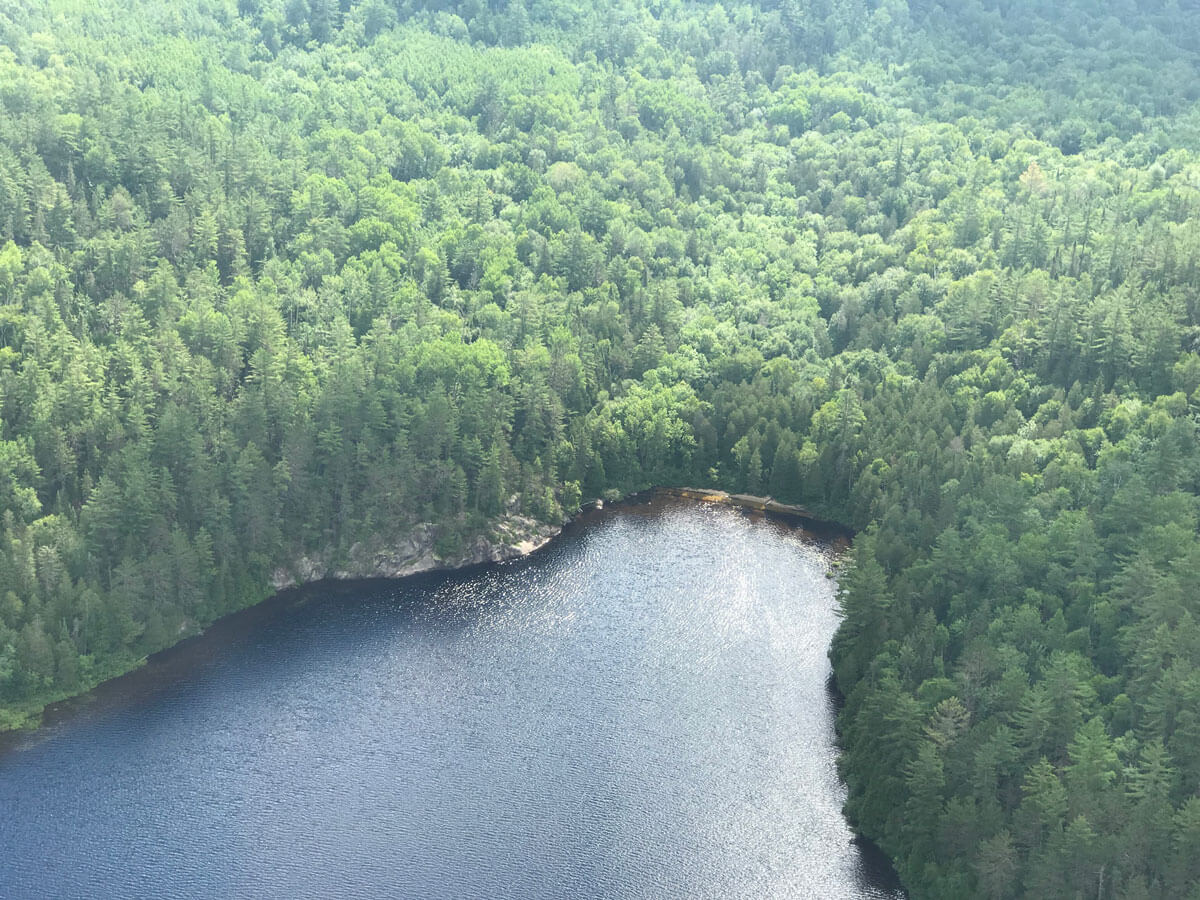 I decided to check out the beach in the cove, as it was way too beautiful to not land and take a closer look. It would provide excellent parking for the plane with a long beach in a small cove. I wouldn't have to worry about strong wind gusts blowing my plane around while parked. 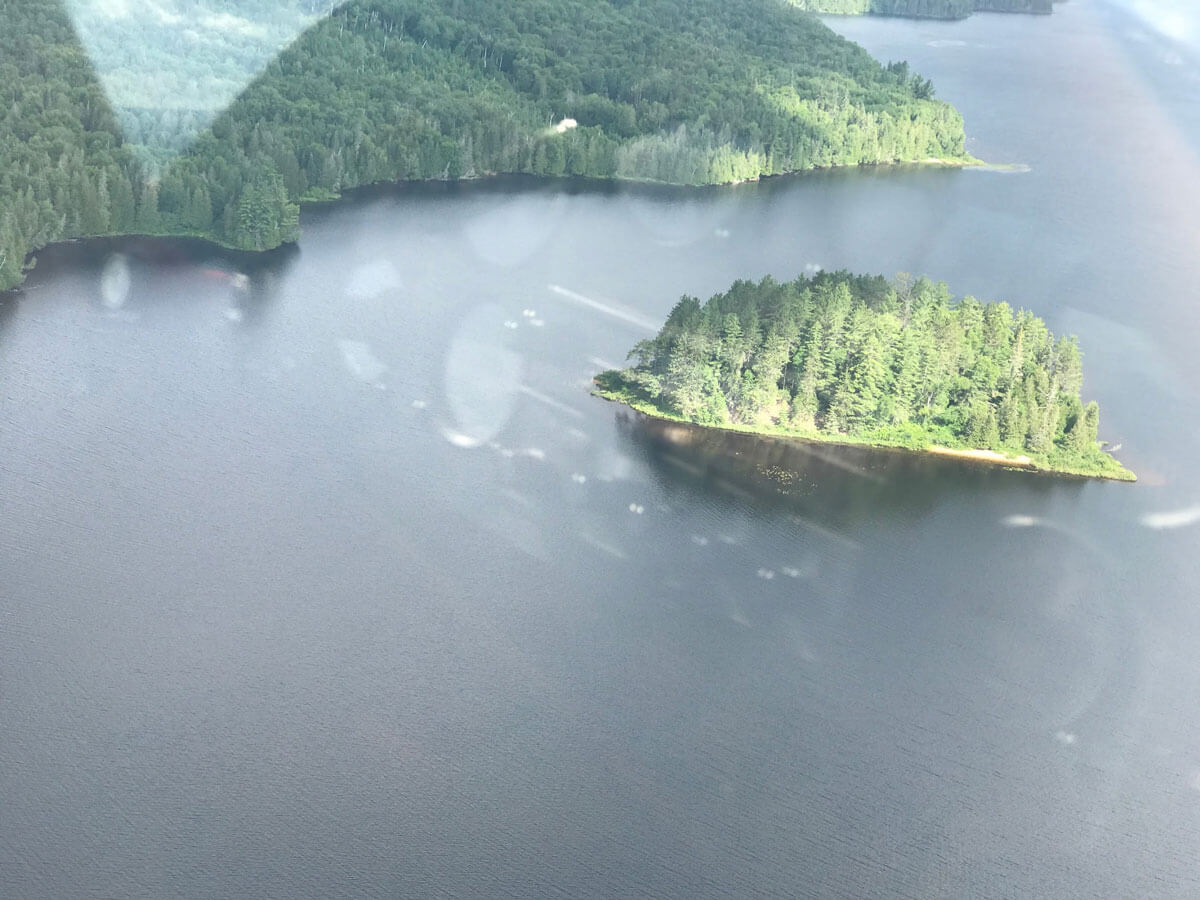 However, wind gusts weren't on issue on this afternoon, it was actually the opposite. Landing when there is no wind can be quite challenging, as the water looks like a reflection of the sky. You lose all depth perception and it becomes very difficult to tell how high above the water you are - which is pretty important if you are landing on said water. 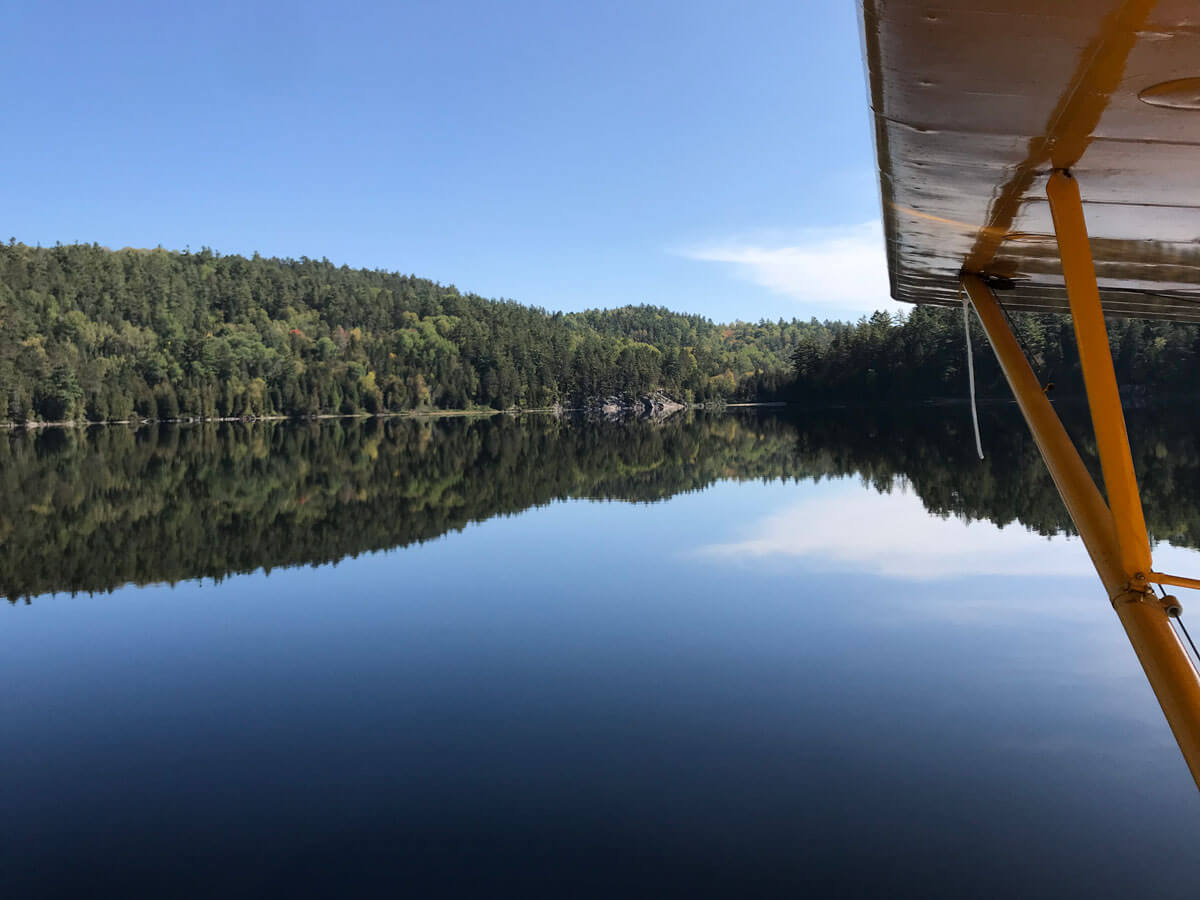 In the end, I managed to touch down safely using a glassy water landing technique and started taxiing to the beach. As we got closer to the beach, I knew we'd found a great spot – it looked even better up close than it did from the air!

Once I was on the beach, it didn't take much to tie the plane down. It was beached on sand and far enough into the small bay that I just tied a safety line on it and it was good to go. Being this far into the cove I didn't have to worry about wind gusts moving it around. 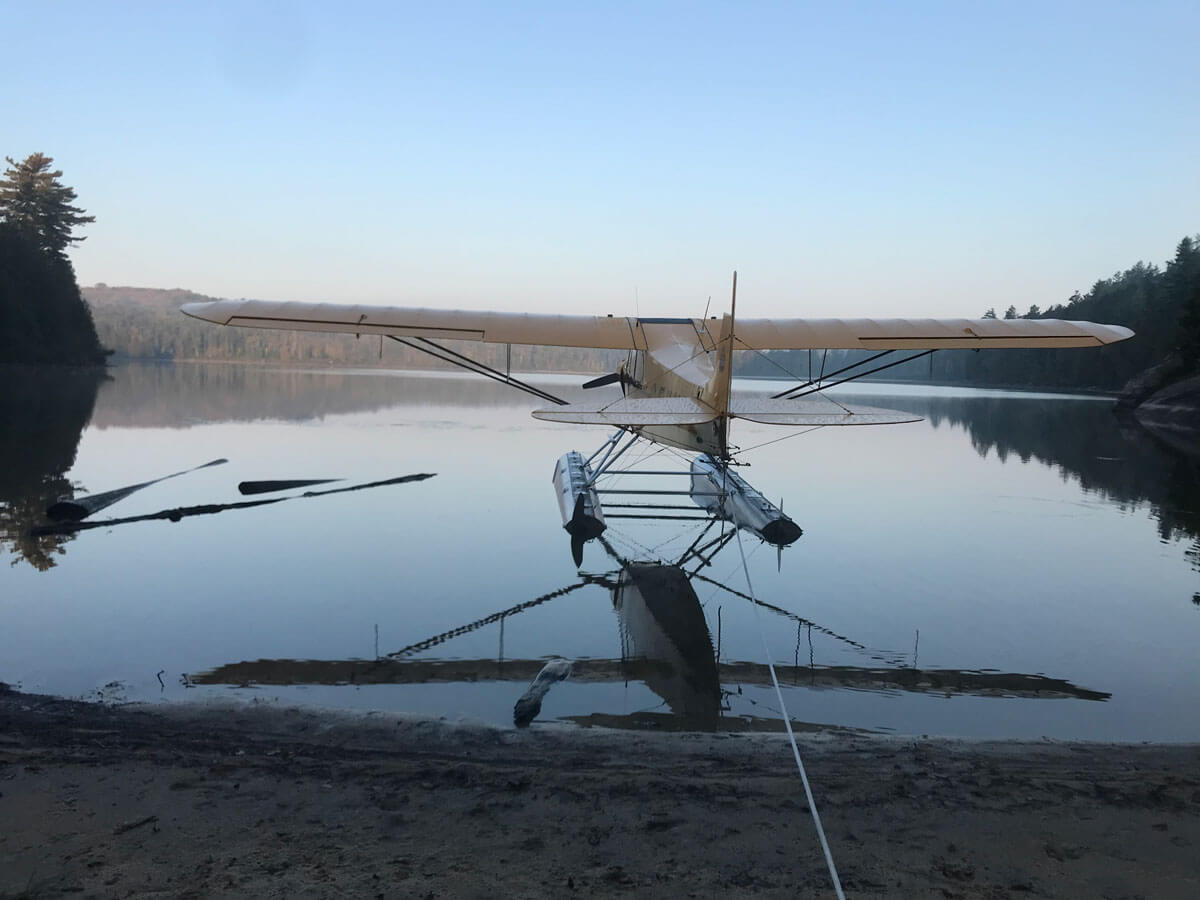 At this point, we were 7-8 hours into the day, and found ourselves in the bush on a long beach with no previous campsite, nowhere to put the tent (as the bush was pretty thick), and nowhere safe to make a fire. Good thing it was still early afternoon as I still had a lot of work ahead of me.

Get an early start if you are planning on camping on remote, untouched Crown Land

My first step after I get to a new campsite is to focus on shelter and fire. I always set up my shelter, build a fire pit, and then collect fire wood to last through the night before I do anything else. The weather can change pretty quickly, and storms can roll in way faster than you'd think, so I always set up shelter ASAP. This attitude has served my well on numerous occasions where I would have otherwise been in a disastrous situation.

Beyond the beach the bush was really dense and the ground was filled with roots transitioning above and below ground. These roots were not leaving me with a whole lot of options for pitching a tent. There was a small opening close to the beach so I decided to try to set up the tent there. It was essentially the only spot possible that didn't require a machete to clear the area, which is not an item in my survival kit. 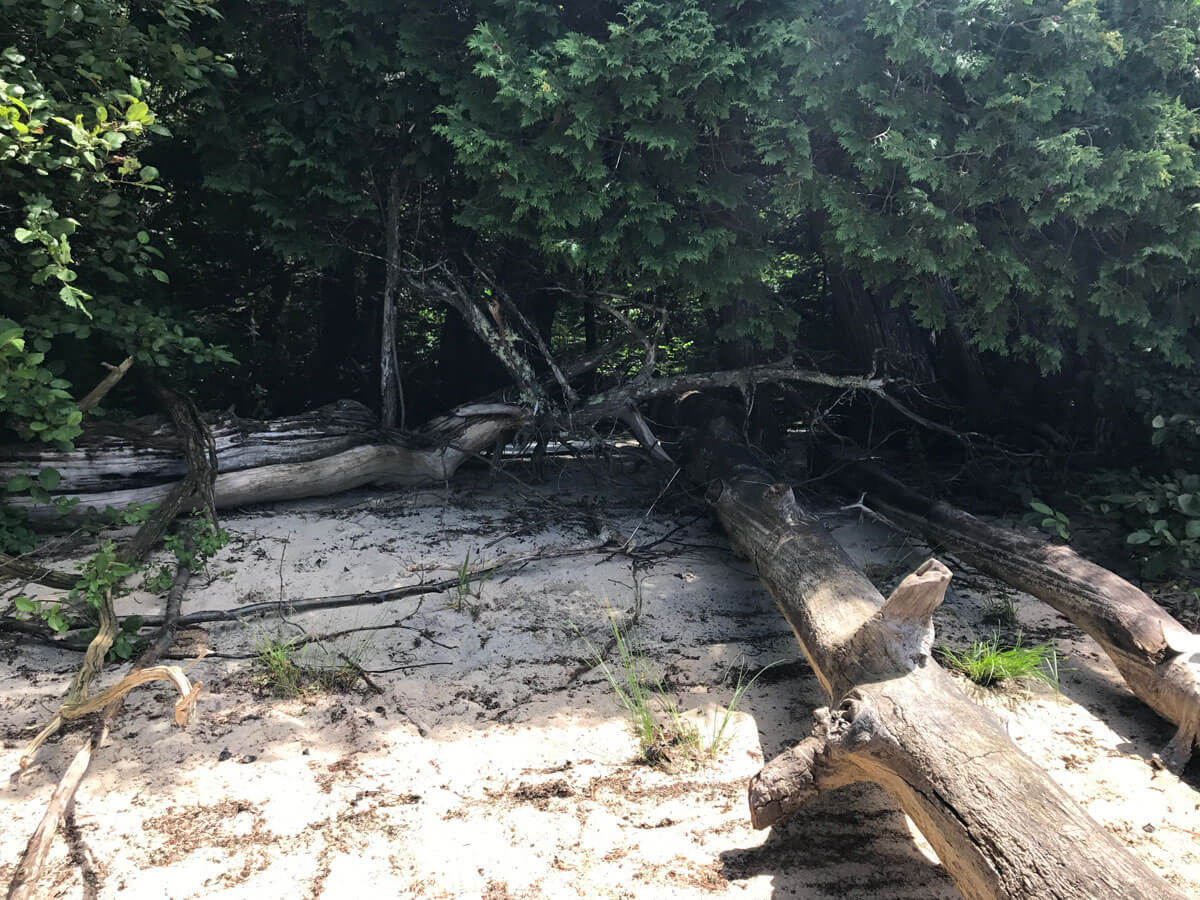 The next thing on my list was fire. The beach was long, but the depth of the beach was quite shallow. I wanted to make sure I built a nice fire ring in this extremely dry weather as there wasn't a lot of room between the bush and the water. The other thing I wanted to do was get rid of this log in front of my tent, but the only option I had was to chop it bit by bit and move it. It was laying flat on the ground and had many awkwardly shaped thick limbs which were preventing me from getting the leverage I needed to saw it. I got started on my fire ring and wasn't looking forward to dealing with the log.

First up for the fire ring was to find some rocks on this beautiful beach. Unfortunately, this took me a lot of time and much heavy lifting because the area was fairly sparse on rocks that fit my needs. When I finally finished I was pretty happy with the result: I had a tall wall adjacent to the bush protecting it from the wind blowing any sparks that way. I was pretty confident that this was a safe spot to have a fire without having to worry about starting a forest fire.

After I finished with the fire ring I wanted to start thinking about firewood. I also wanted to get rid of the huge log in front of my tent. To kill two birds with one stone, I started hacking the log into firewood sized chunks using a combination of my Sven saw and my hatchet. It was extremely tiring due to the fact I couldn't saw or chop it at normal angles because of the thick branches. 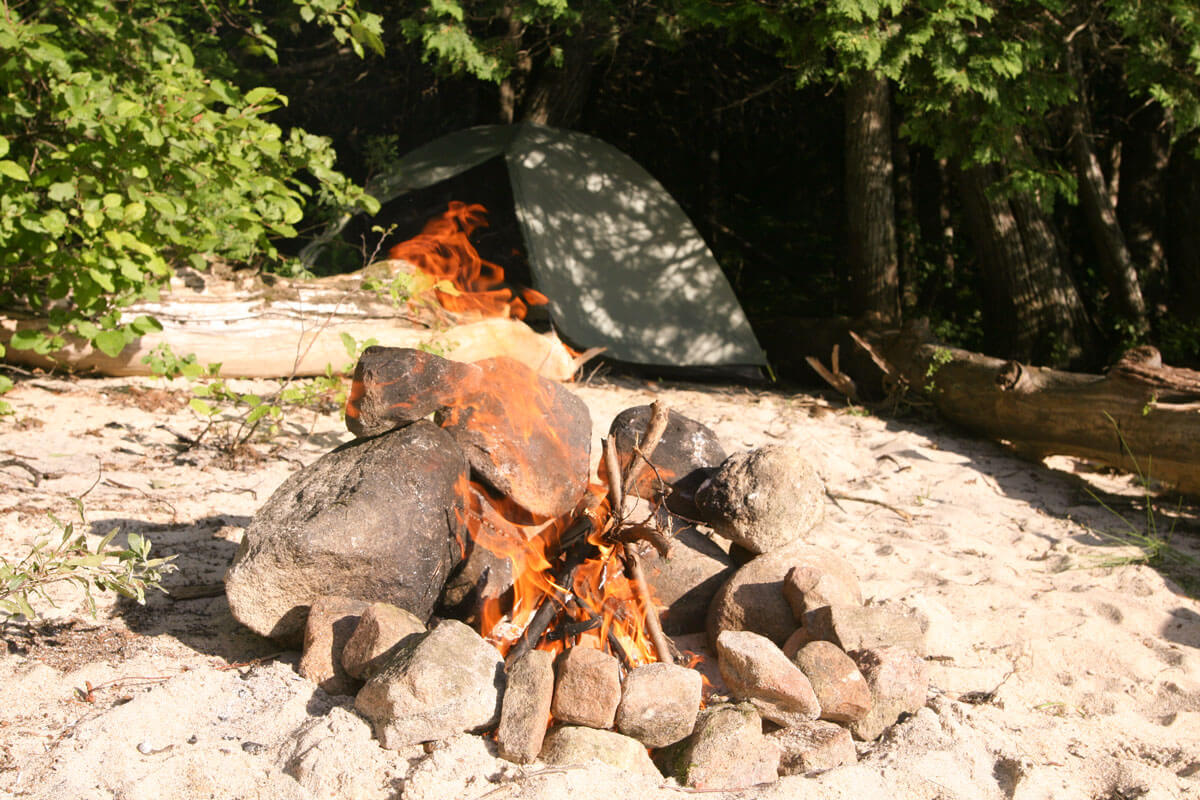 It took me over an hour to get through it but you can see above how cleaned up things got. I was extremely tired at this point, but before taking a nap I wanted a nice meal cooked over a hot fire!

Now that I had shelter and a fire I could start relaxing and organizing my things a little better. It was now approaching early evening and all I could show for it was a tent and a fire. The moral of this story is that if you are planning to camp on crown land that has not previously been a camp site - get an early start!

Be sure to check out the rest of the adventure – including searching around for a good spot to drop in a fishing line – in part II of this series.