Maverick and I were setting out on a fly-in fishing trip up north in Ontario with 5 other planes. The plan was to fish 5-6 different spots throughout the week. Some of the spots we planned to visit we knew there were boats hidden in the bush, but some locations were new. These new locations to explore were found through countless nights in bed on an iPad with Google Earth. 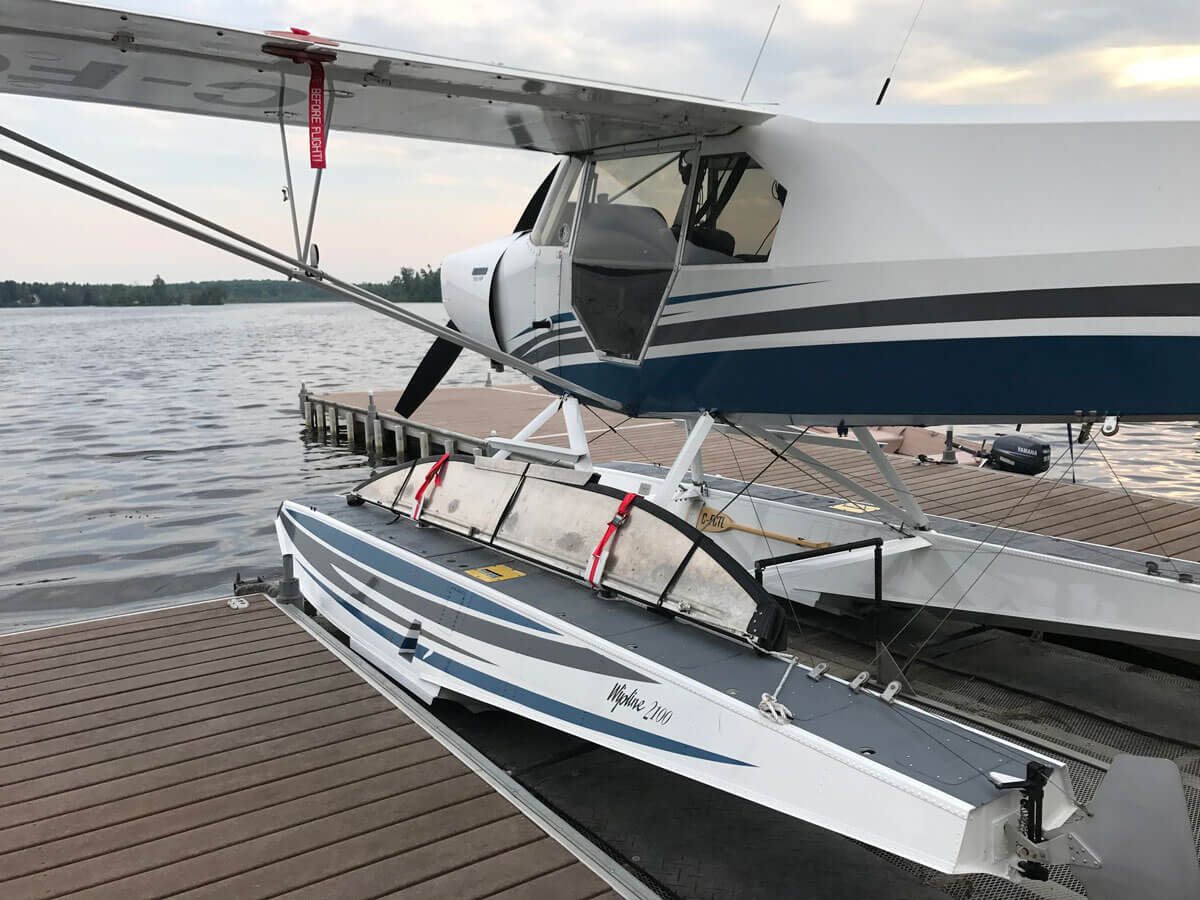 Most of the pilots were going to stay at the first location for the week, but Ron, the owner of a nice looking PA-12, and myself were going to go exploring the new spots I had found. We brought his foldable boat so that we could fish at some of these new locations were we hadn't previously stashed a boat. 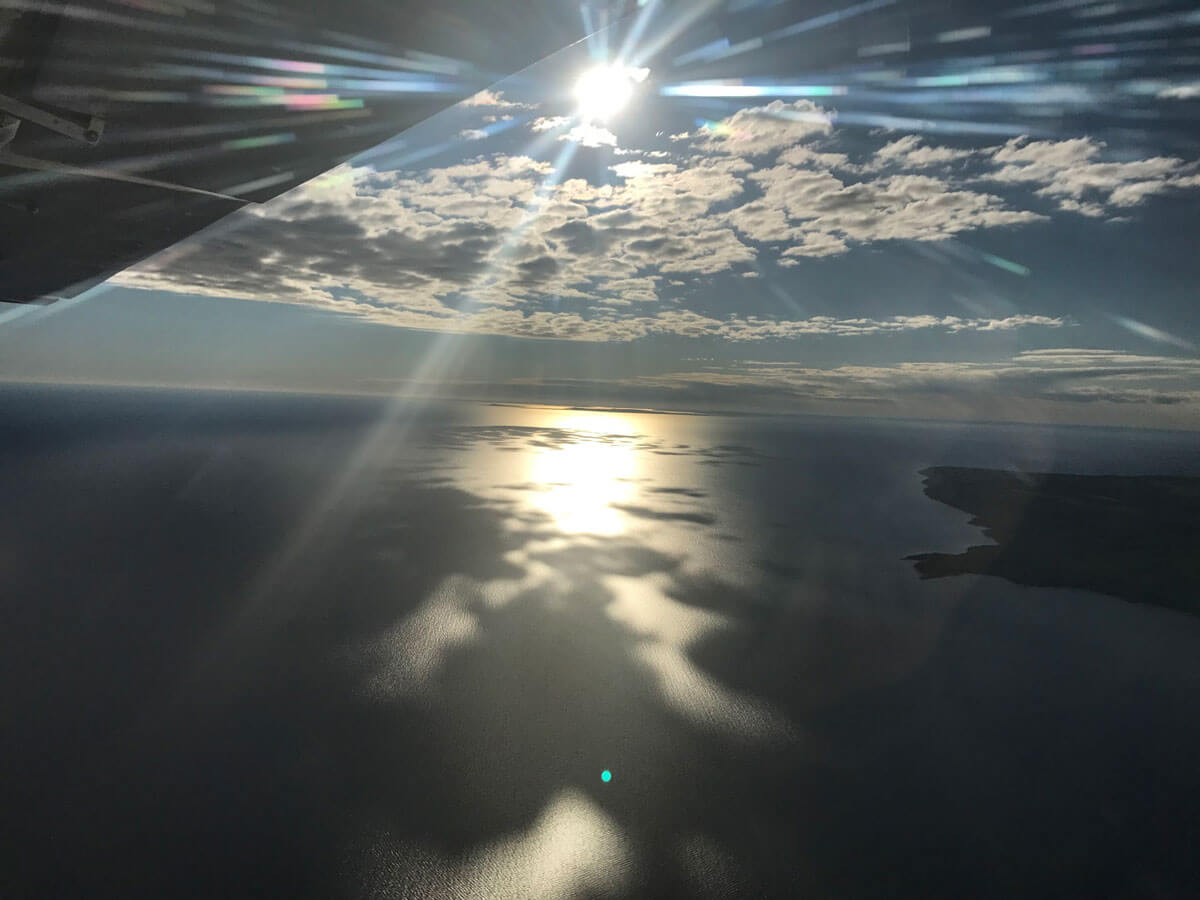 We got to view a beautiful sunrise as we flew over Georgian Bay on our way north of Sudbury. As we got further north we started to see more and more logging sites, which look very sad from an aerial view. It's shocking how many of these sites there are up north - they are very difficult to notice them from the ground level. 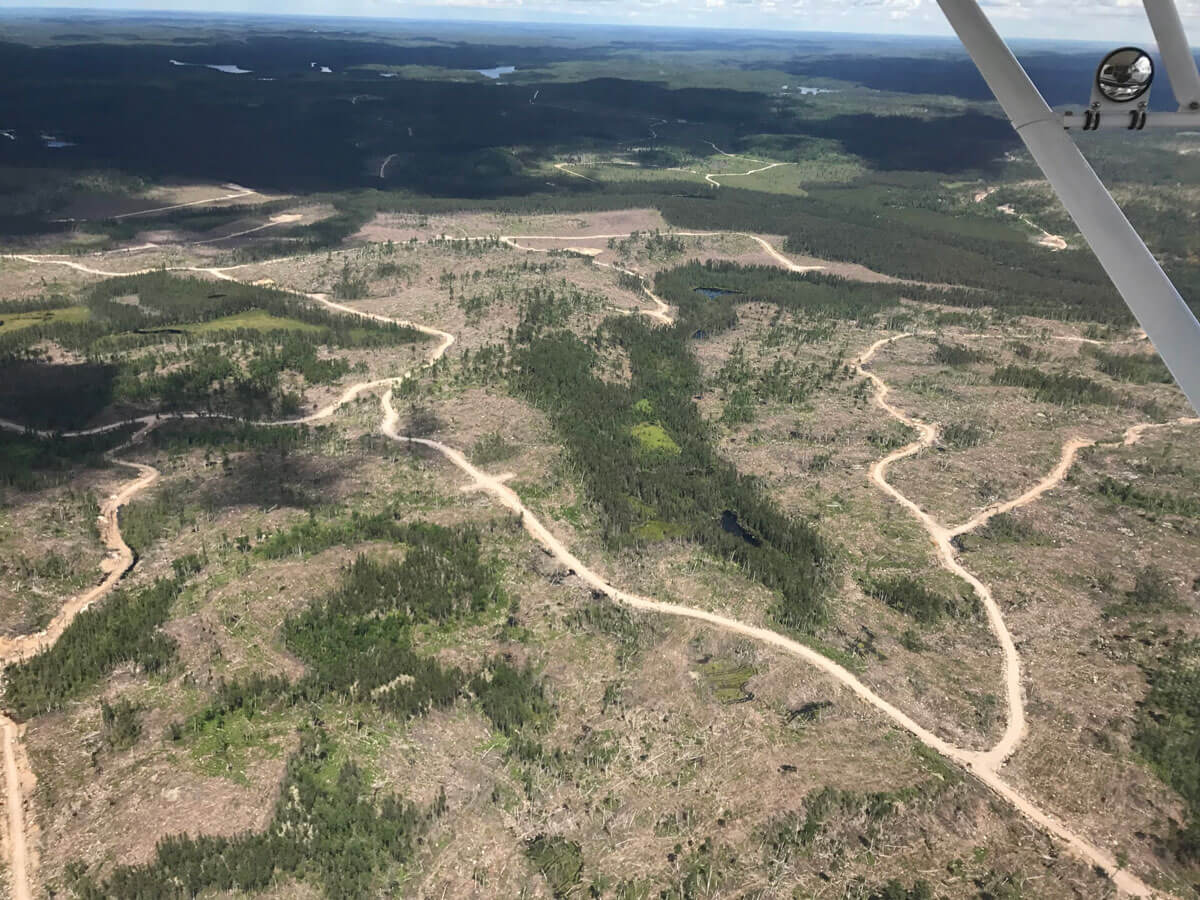 By the time we got to our first fishing spot, four of the planes had already arrived and were out on the water fishing. We were going to use Ron's Instaboat and a two-stroke 1.2hp Gamefisher motor made by Sears in the 1980s. 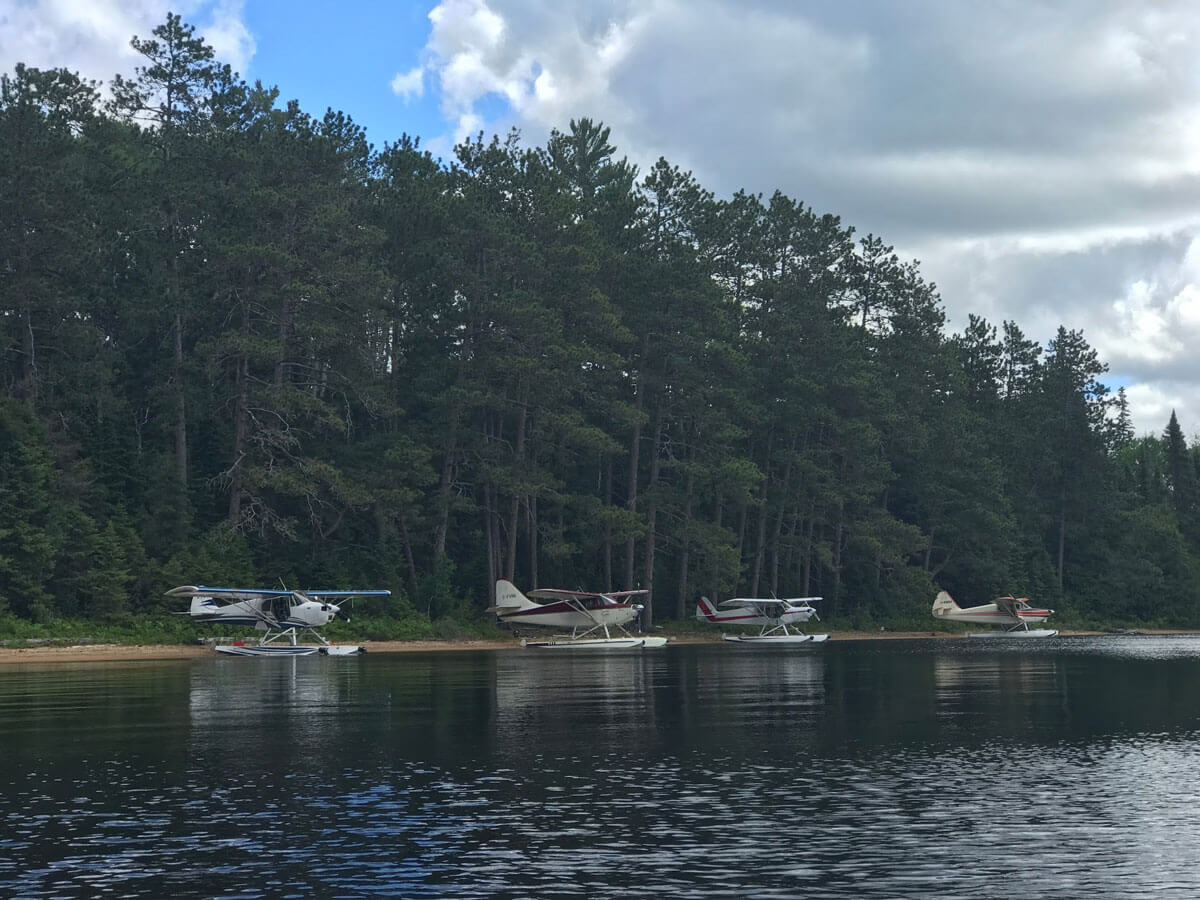 The boat can be set up by one person, but it's much less effort with two people and can be done in about 5 minutes. It's a great little boat for fly-in fishing trips weighing only about 70 pounds. With the limited baggage space of these small floatplanes, it's nice to be able to strap a boat to the side. 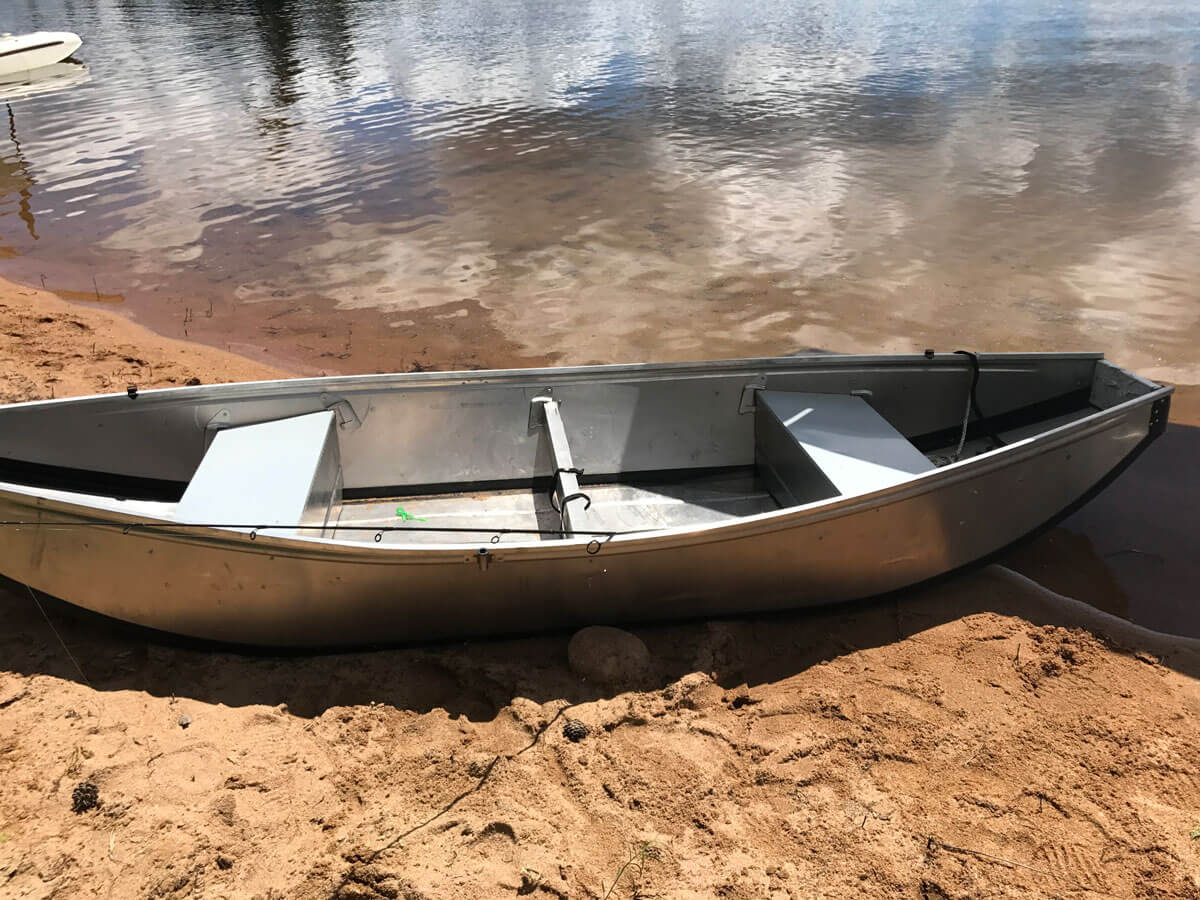 We didn't need to fish long at this location before pulling in a nice mix of walleye and pike for a nice fish-fry dinner. We caught some nice fish but had to put a few of the bigger ones back that were above the slot limit. 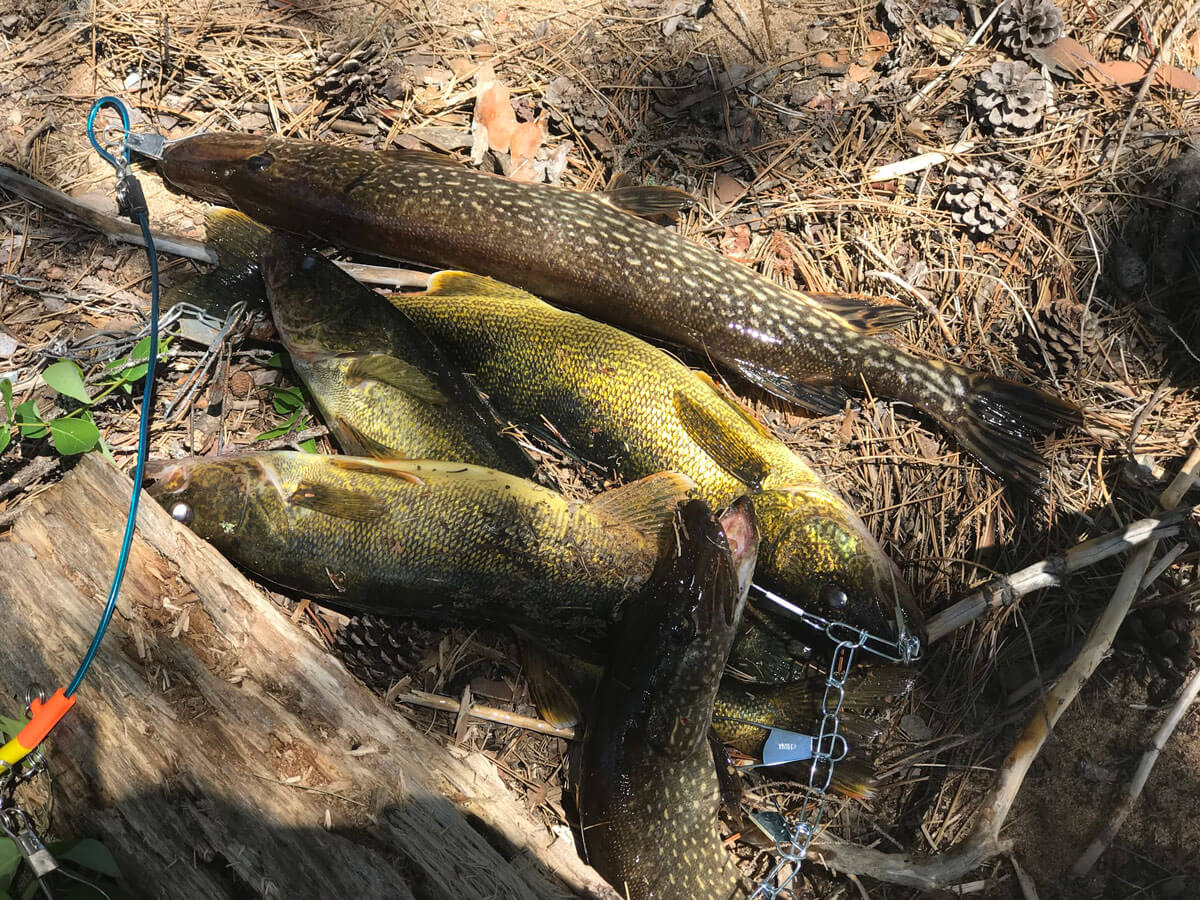 We didn't follow either of my exploration rules for this trip and it cost us a punctured float and a stressful night worrying about our planes in a severe thunderstorm.

Ron and I wanted to head to explore the first new spot on our Google Earth must explore list. We wanted to give ourselves enough time to land and set up the tents as the winds were starting to pick up and we knew that storms were coming in. 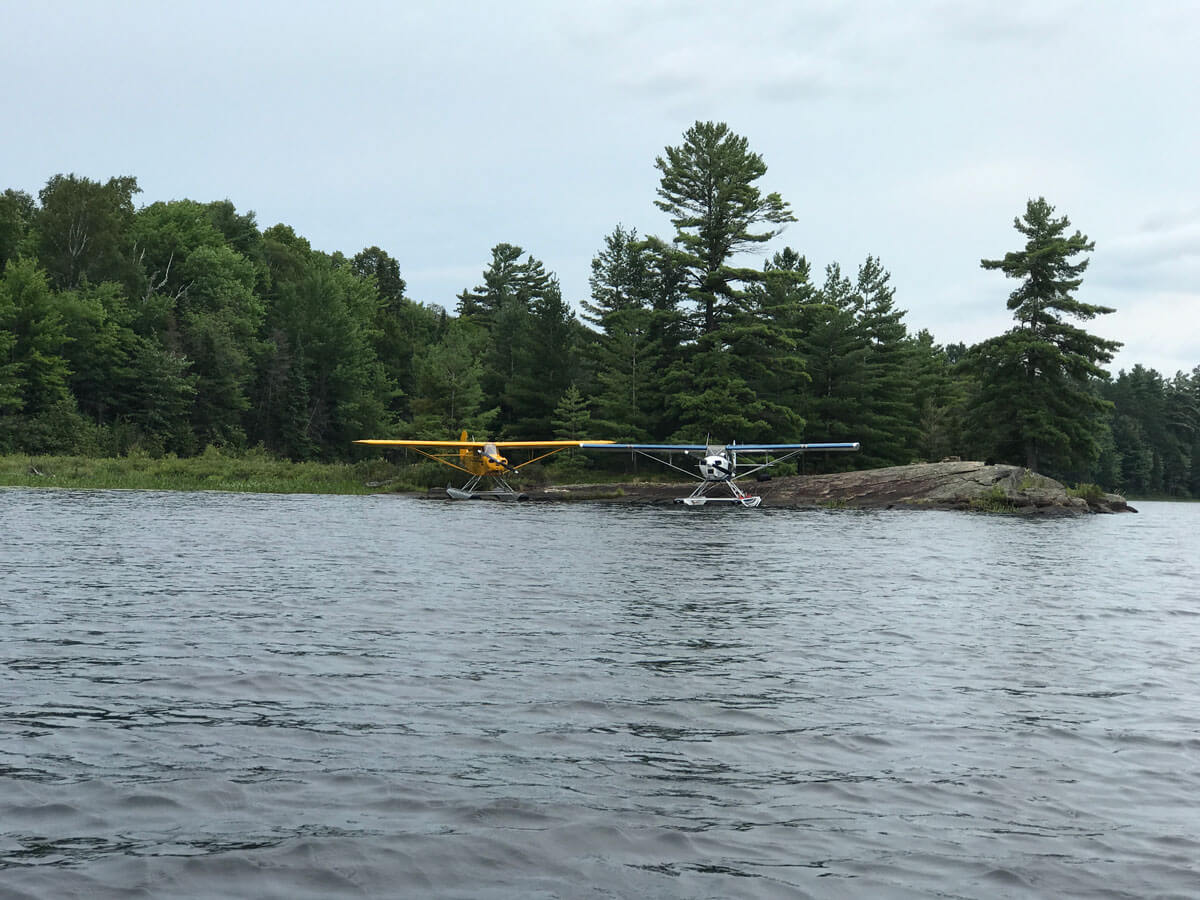 We hadn't decided where on the lake we were going to park our planes before arriving at the lake. This is the risk of picking out spots via Google Earth, as once you land you may realize that there's no real good spot to leave the plane. With the storm incoming, we couldn't leave, so we would have to make this location work. After quite a stressful struggle, and one punctured float, we managed to get the backs of the floats onto the rock and somewhat secured. With the incoming storm, we weren't thrilled with the plane setup. When we were pulling the cub onto the rocky shore the rudder jammed against the rock and sent the bolt through the back of the float. 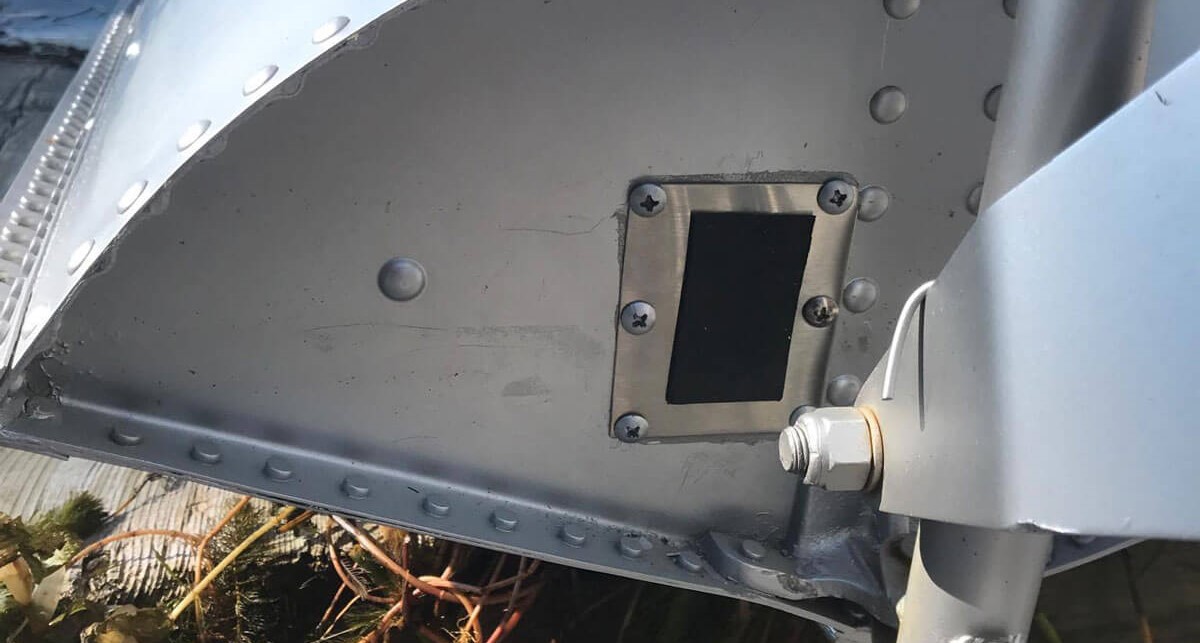 I was too stressed out to take a picture of the damaged float or the temporary repair. The above photo was the permanent repair with silicon, a metal plate, and a rubber stopping pad for that pesky bolt. Luckily, I keep silicon and tuck tape in my plane and was able to prevent any water from going into the float until we got back home to repair it.

The situation was getting pretty stressful now with storms clouds starting to roll in and our tents still in the plane. It was difficult to set up the tents in this spot because it was all rock. To secure the tents, we had to tie paracord from each corner to the nearest tree. There were limited trees in this area as it was pure rock, so we had to use a lot of paracord to get to the nearest tree. 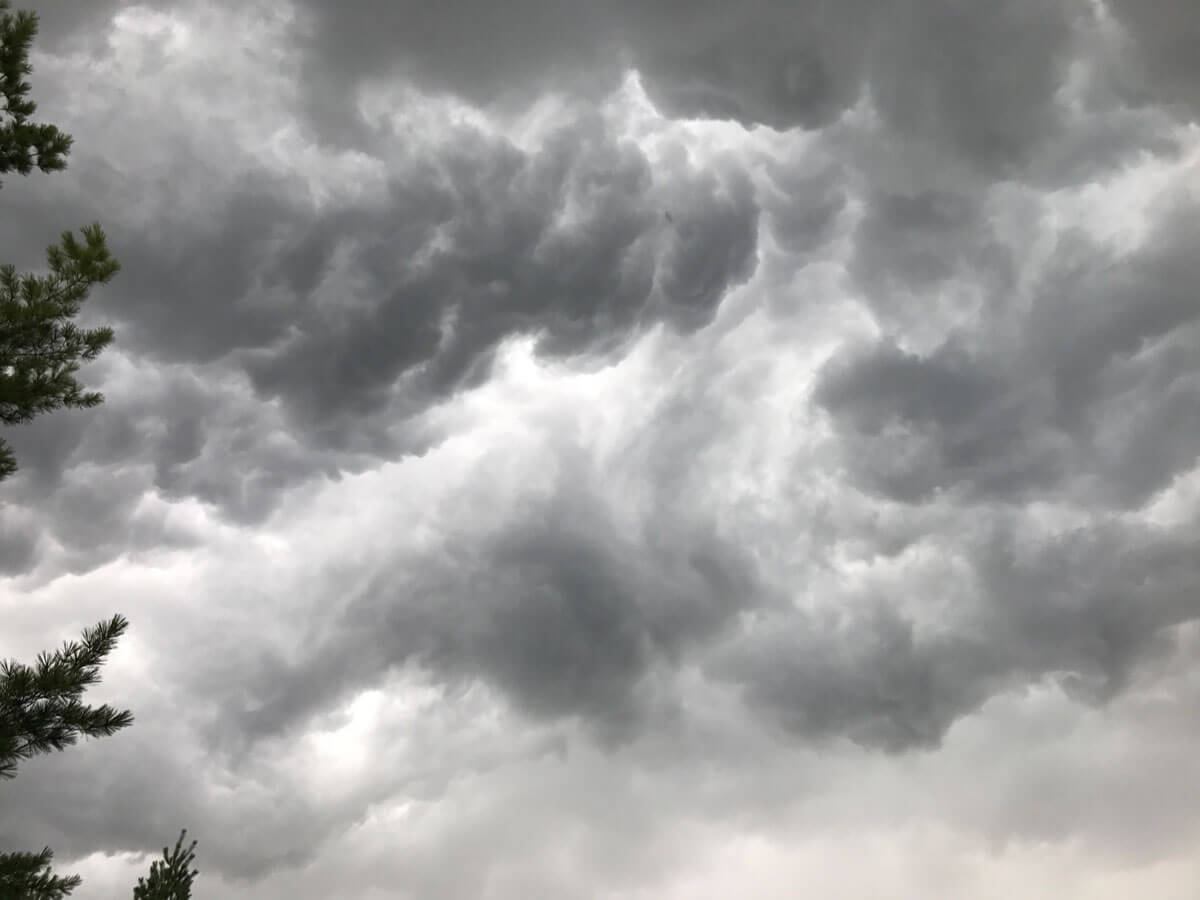 We finished setting up our tents just in time to avoid getting soaked, but it wasn't pretty. Back in my previous post Setting Up Camp on Crown Land in Northern Quebec, I talked about the importance of arriving to unknown spots nice and early to find a good, safe spot for the plane. We didn't follow either of those rules for this trip and it cost us a punctured float and a stressful night worrying about our planes in a severe thunderstorm.

Our planes were only slightly perched up onto the rock edge and tied up very close to each other. It was a nerve racking night thinking about the planes with the howling winds, thunder and lightning. Finally, I was able to sleep after hours of waiting to hear wing on wing contact from these strong winds. 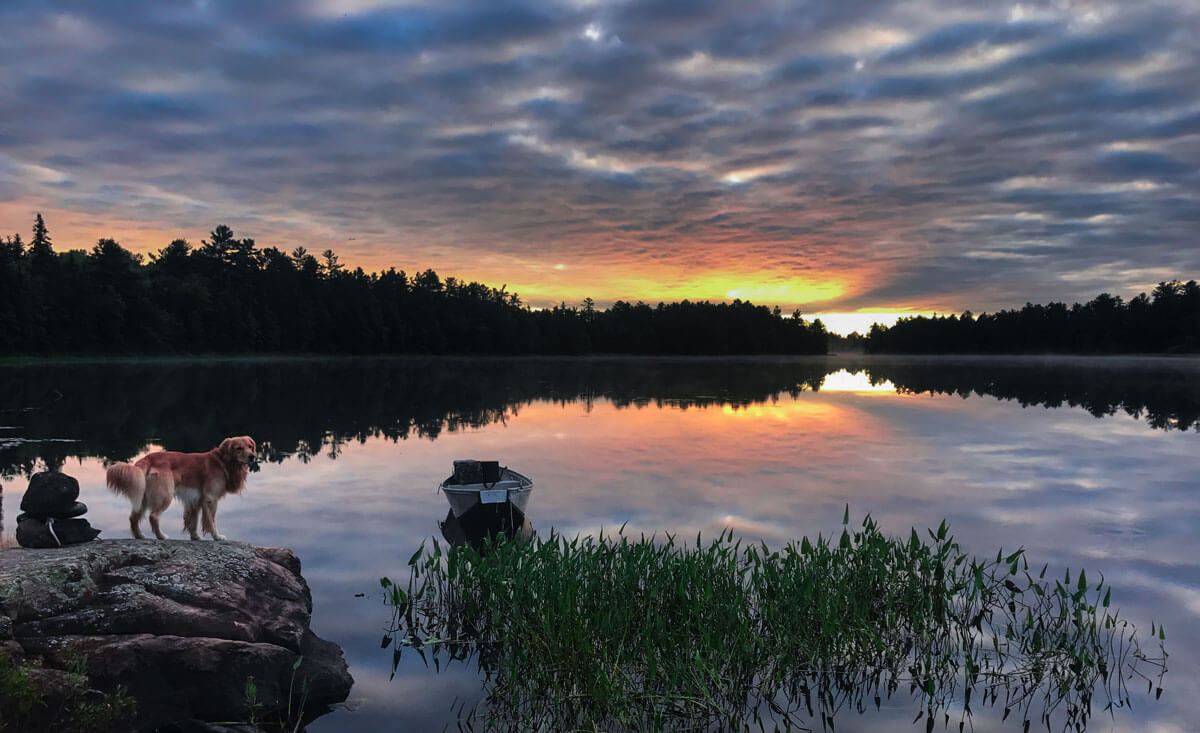 Maverick was the first to rise in the morning after an early night. He could smell the fish and was eager to get going!

We fished for a little bit before breakfast catching a mix of large and smallmouth bass. We didn't plan on staying at this spot long, as we had several other locations on our agenda and we wanted to give ourselves enough time at the next location. Maverick didn't seem to share the stress and anxiety I was feeling; he was quite enjoying a large bone that he found. Dogs are so simple and when in an environment they love they are so full of pure joy. 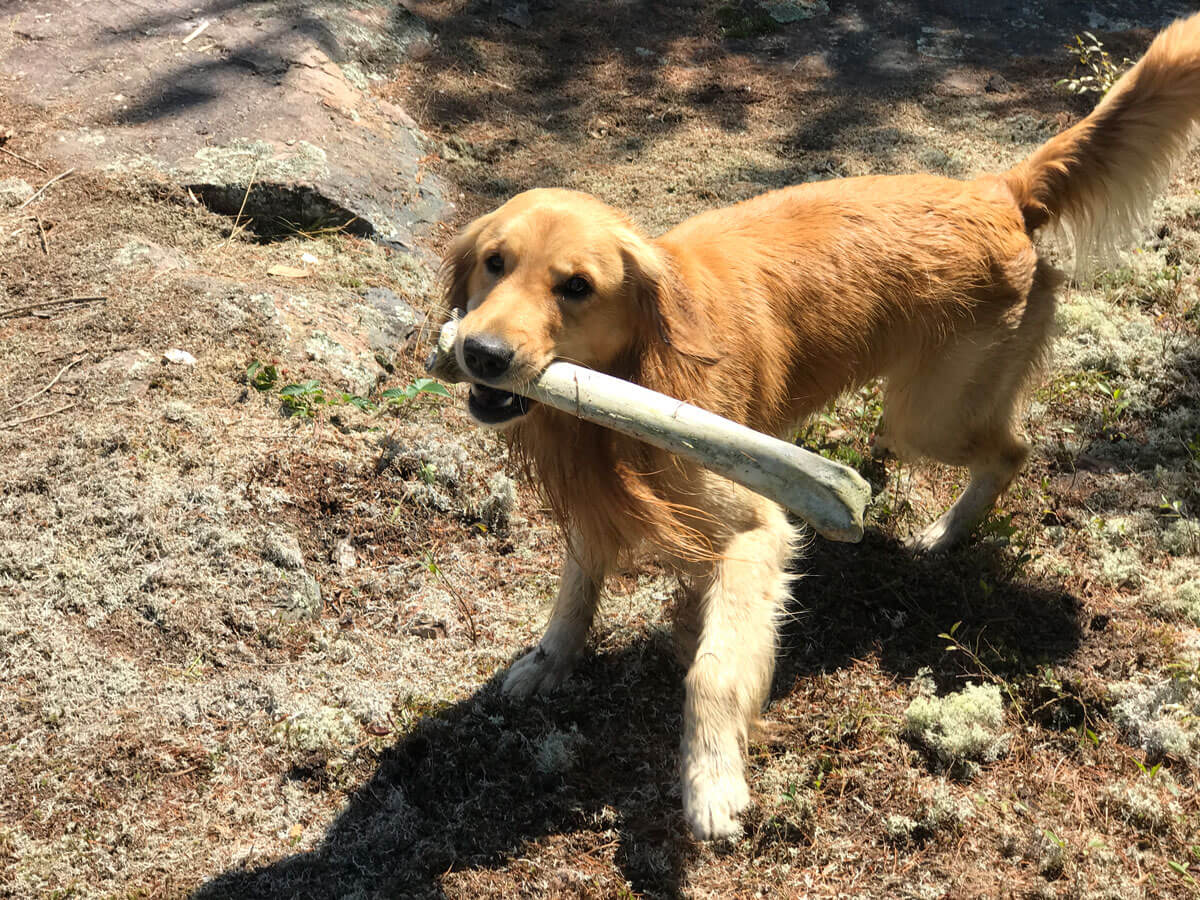 He was very proud of this bone and carried it everywhere for our rest of the trip.  We started to cook a nice hearty breakfast over the fire while Maverick continuously pounced on and rolled all over his sweet bone. 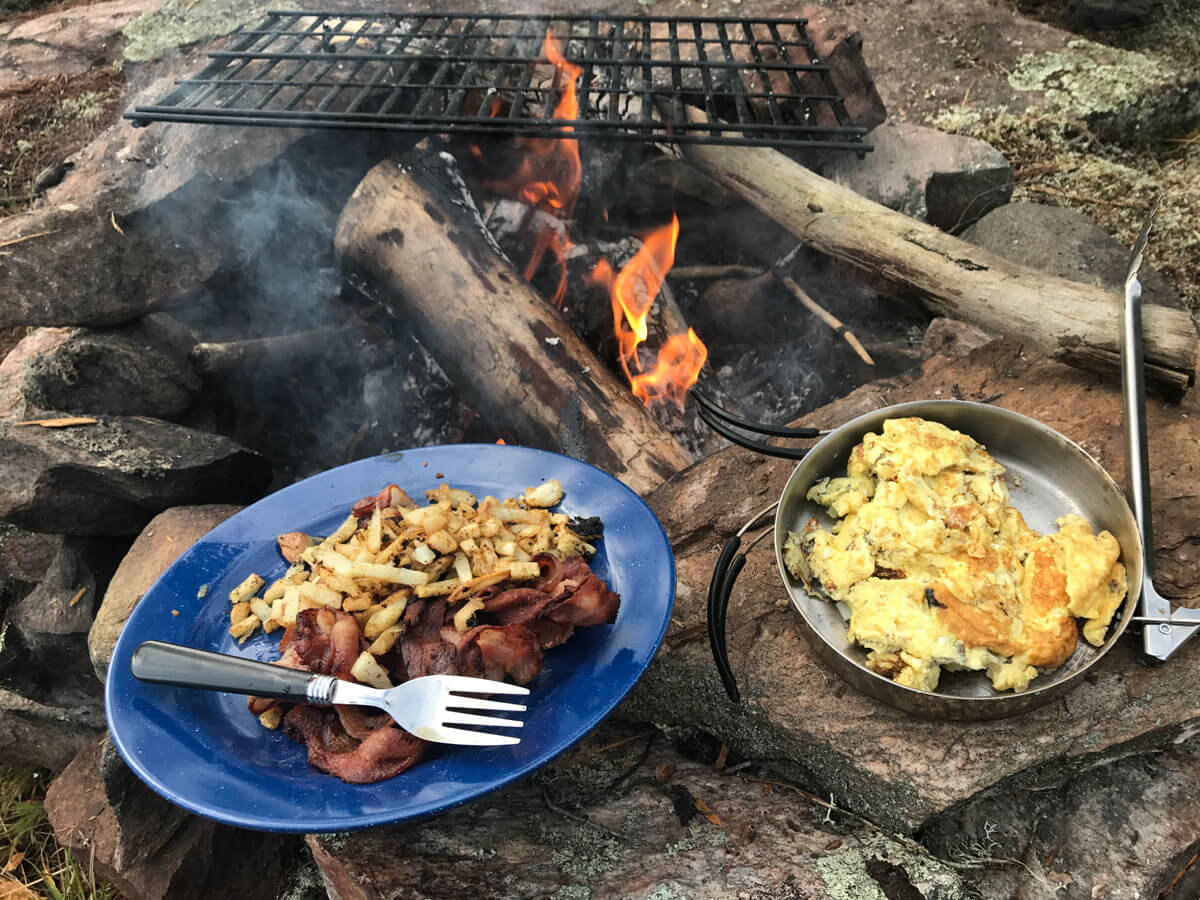 It wasn't long after breakfast that we started to pack our things. Maverick did not want to leave - he wanted to get another fishing trip in! He sat in the boat the entire time we were taking down camp and packing the plane. 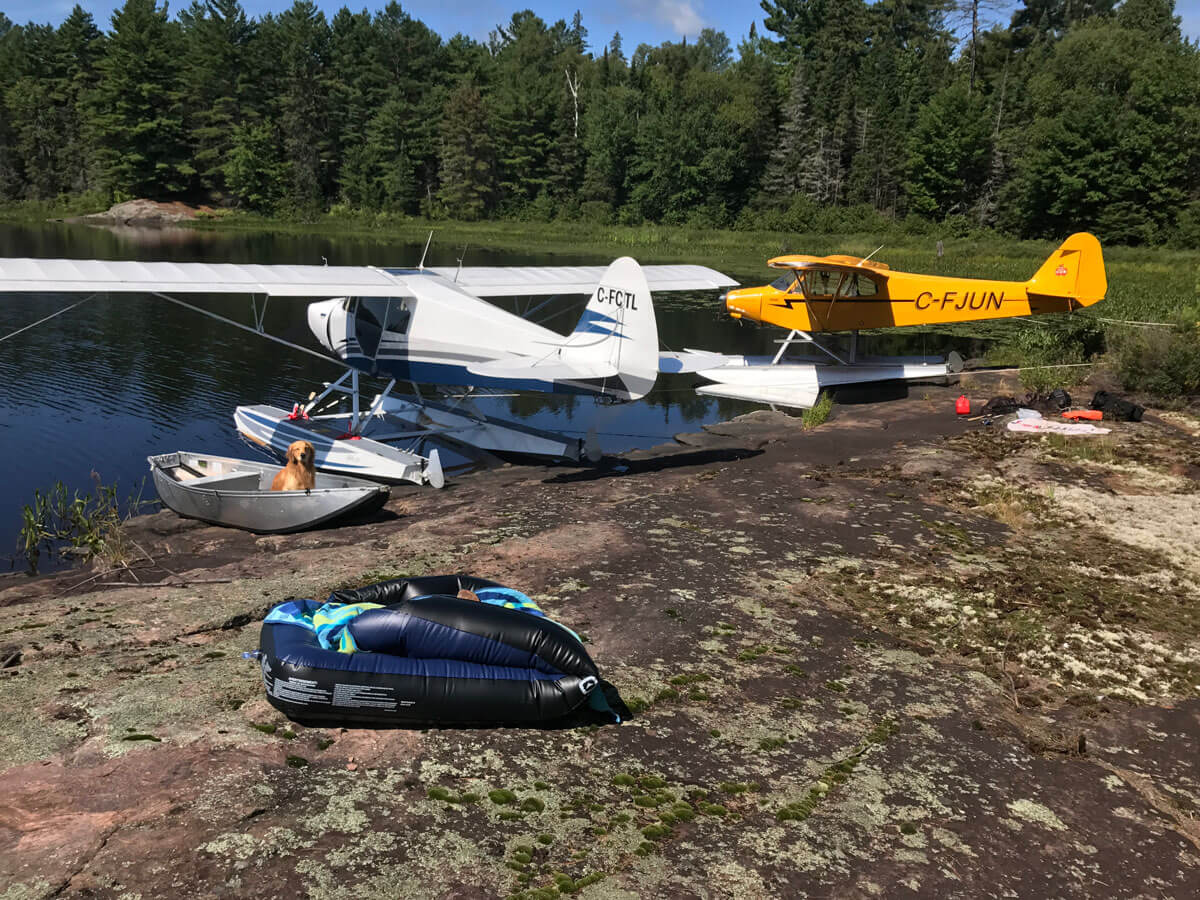 Maverick loves fishing; he can't get enough of it. Any time he senses that there is going to be a chance of a fishing trip he sits in the nearest boat and waits. 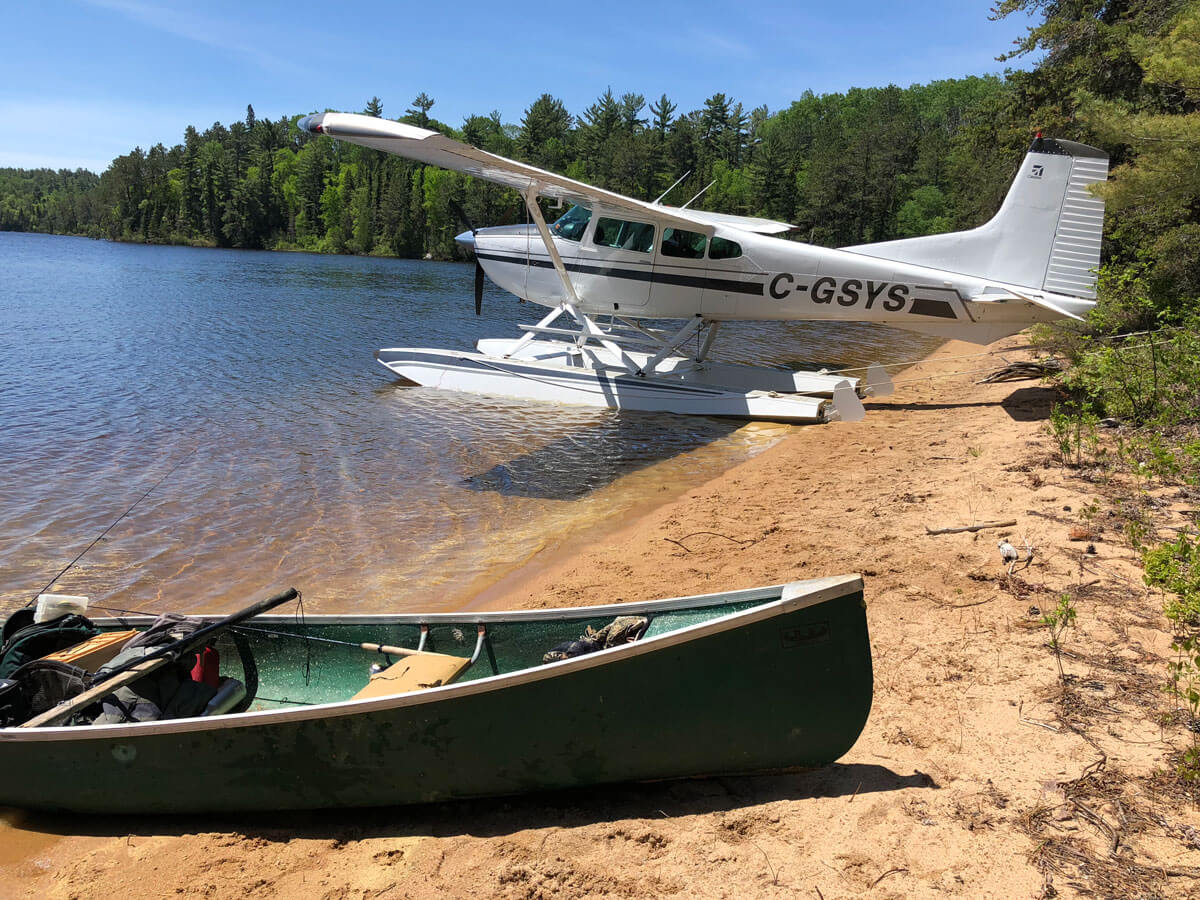 Our next location on our list was a spot that we had been to before; we knew there was going to be a boat for us to use. It's one of my favourite lakes for fishing walleye and pike.

Before we headed out on the water I took Maverick for a hike into the woods. As we got deeper into the bush, Maverick stopped dead in his tracks staring off straight ahead. He usually does this when we are walking off-leash and there is another dog in the distance that he would very much like to visit. In this case, it wasn't a dog, it was a deer. The deer was also frozen looking at Maverick in this standoff that seemed to last ages. They were both waiting for each other to make the first move. The deer must have heard something or figured it was a good opportunity to run for it as he suddenly bolted off in the other direction. Maverick's hunting instincts kicked in and chased after the deer. The chase didn't last long, as the deer gracefully ran through the dense forest while Maverick clumsily tried to follow.

After a short-lived chase, Maverick came walking back to me, disappointed as always after failing to catch his furry friend. 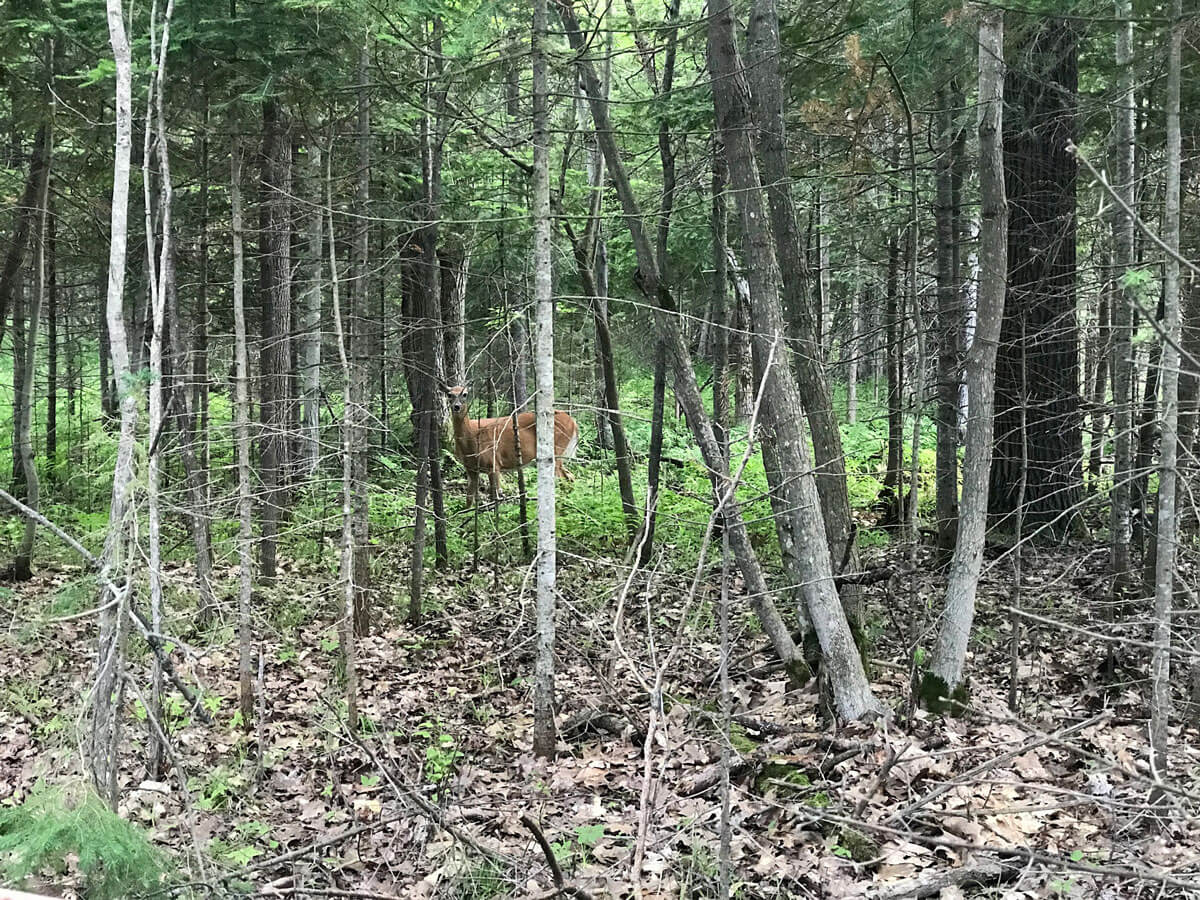 I headed back to the water to put the motor on the boat and get everything ready to head out onto the water. At this point we had caught a good number of minnows and we were using them for bait on a jig head with a removable spinner. This is one of my favourite lures, as it pretty much catches anything. When minnows are unavailable I will just use a twister, which works great as well. 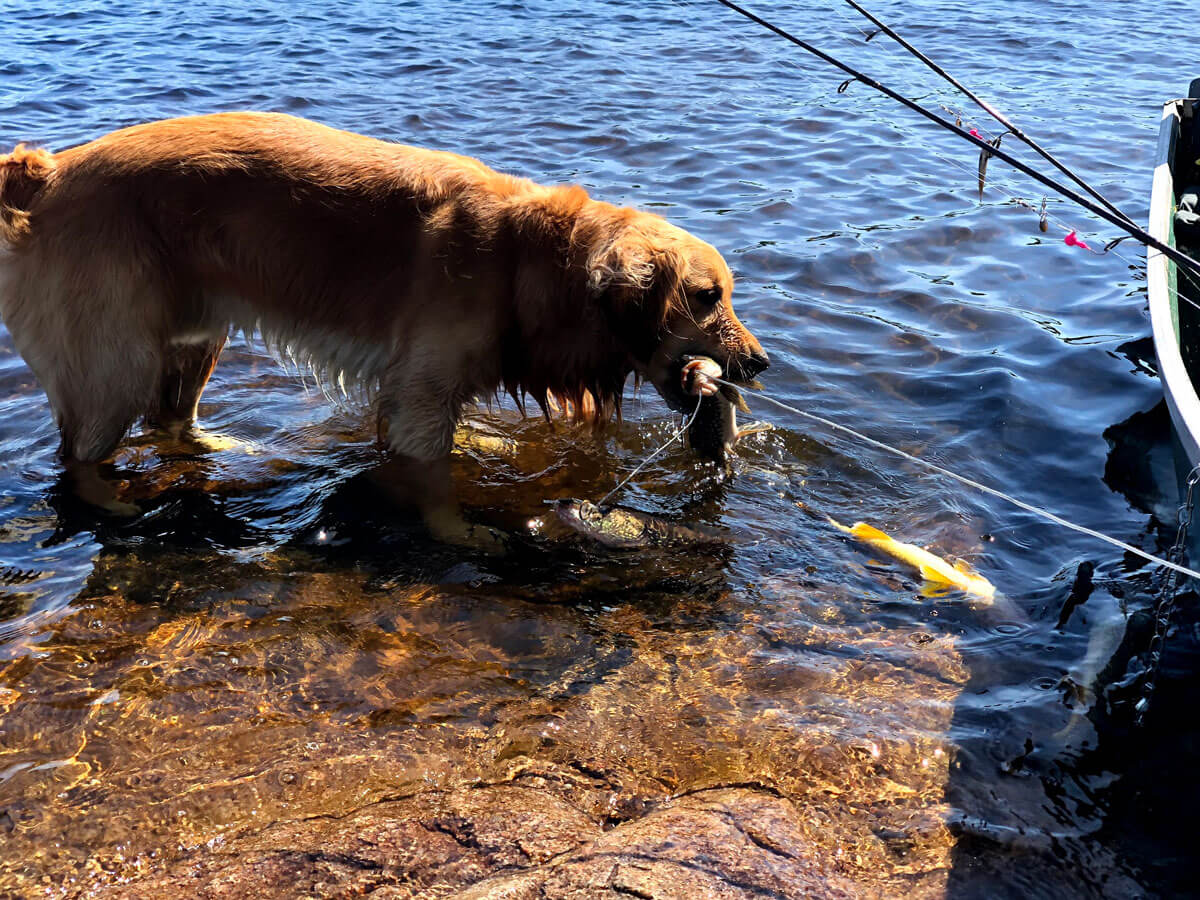 Did I mention that Maverick likes fishing? He loves to catch fish after I've caught them. He walks around with them in his mouth acting like he did all the work. 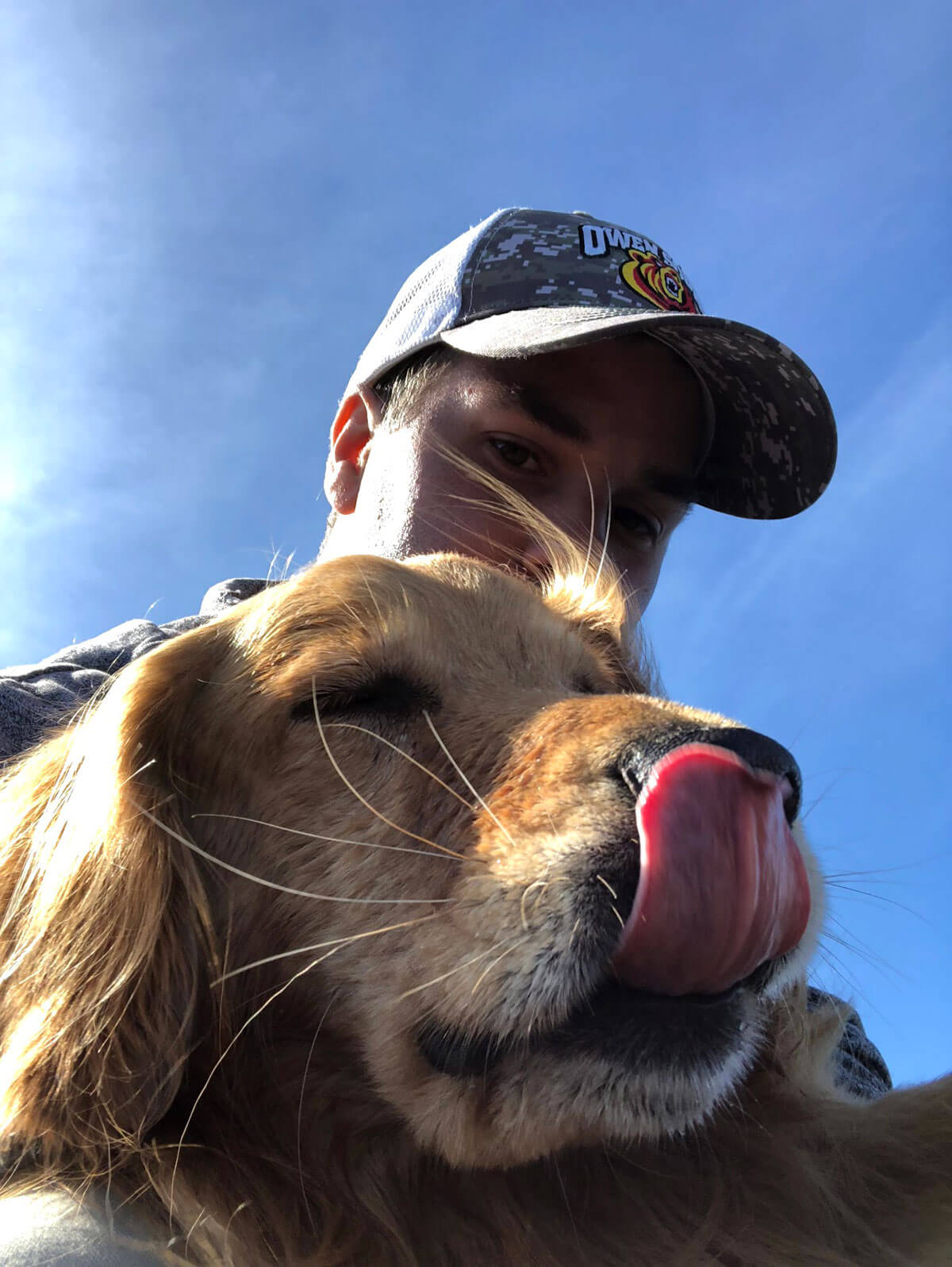 It was a good day with plenty of walleye and pike again! We enjoyed the rest of the evening sitting by the fire getting ready to head to our final spot the next morning. 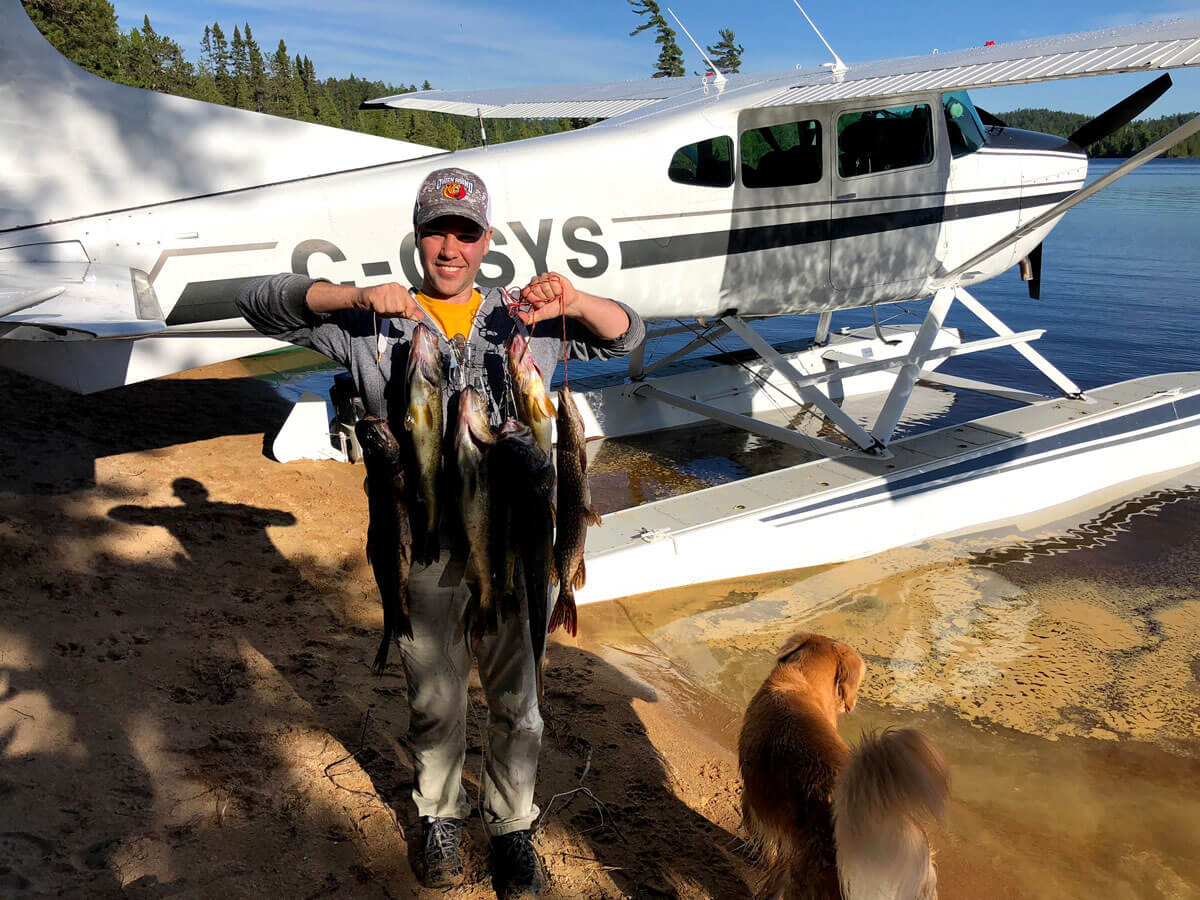 The next location was on our way back to the city staying at a hunt camp that we had never been to before. It was a great lake for speckles and lakers, but even more memorable than the fish was the view at 4am the next morning. 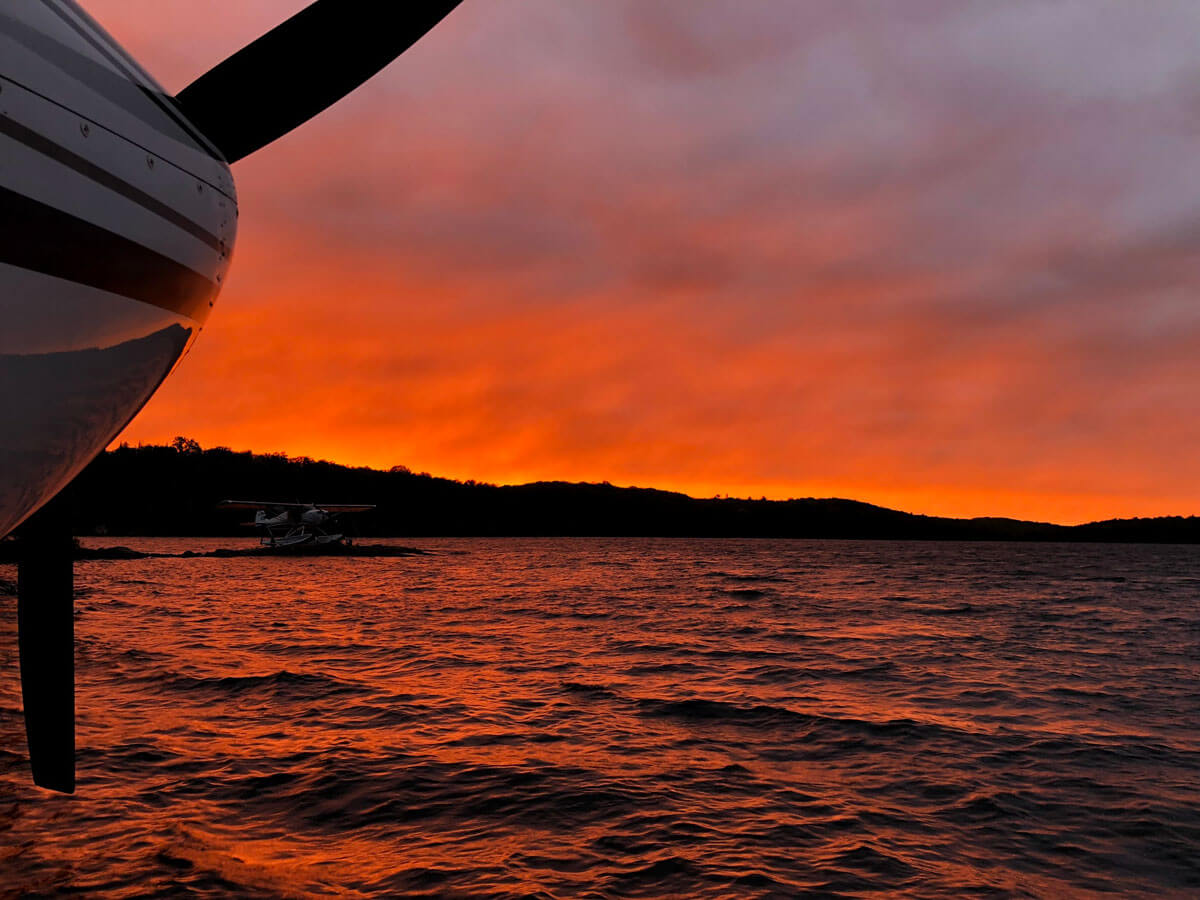 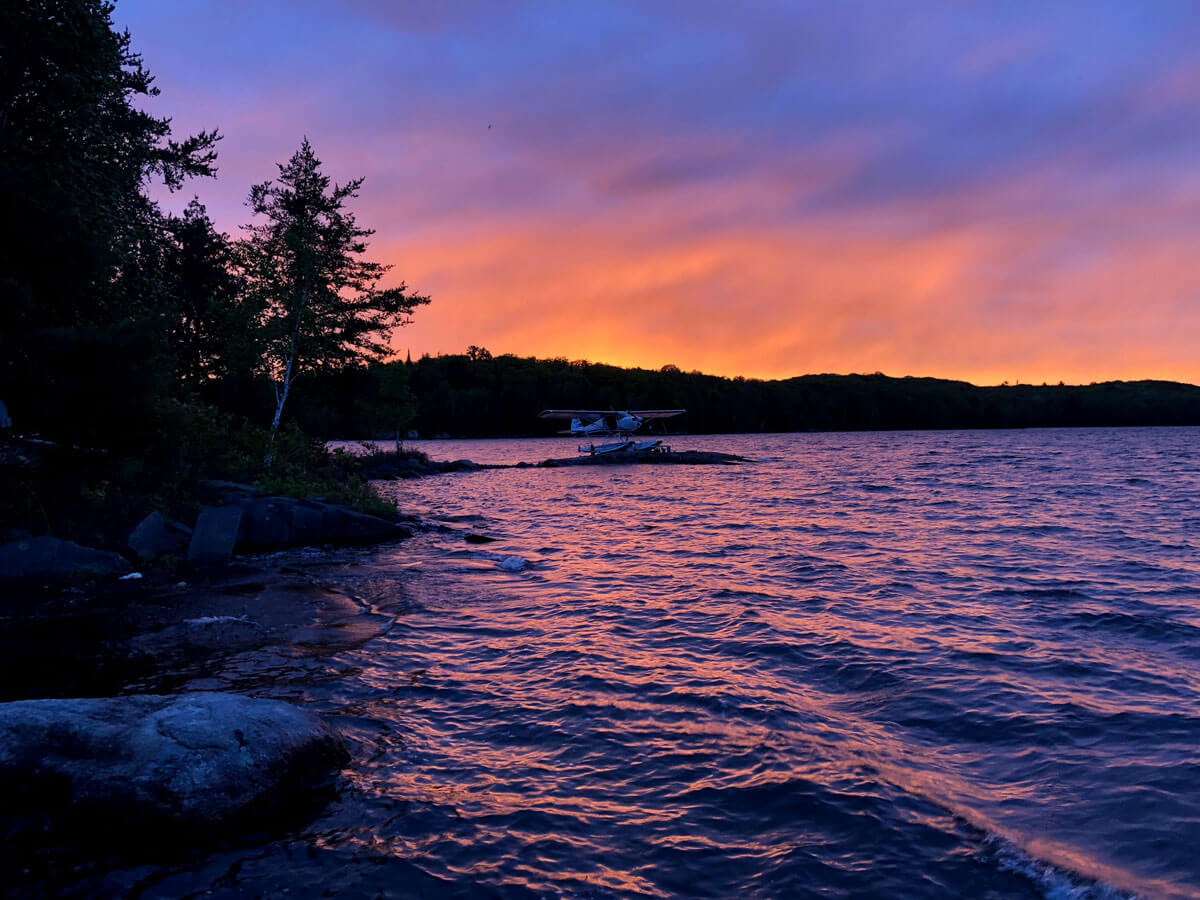 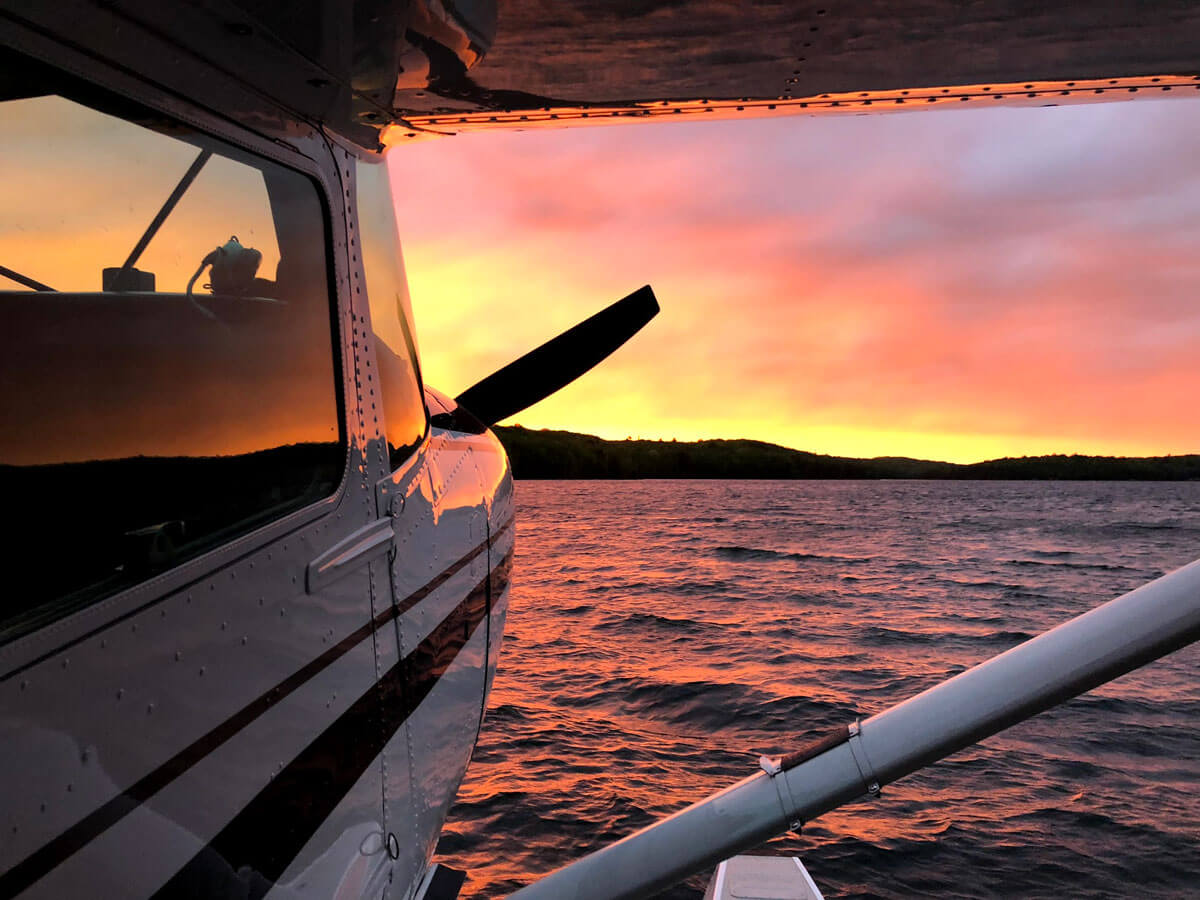 Within a 45 minute span we viewed the quickly changing colours of the early morning northern sun. It was a beautiful way to start the morning on our journey back home. The trip was a resounding success after finding several new fishing and camping spots. We will definitely be marking these ones on our map as spots that deserve a return trip!