You may have read about how I was exploring Quebec Crown Land and found this beautiful camping spot. It took almost all day to find this lovely little cove, clear out a spot for shelter, build a fire ring, and finally get a fire going to cook some dinner. 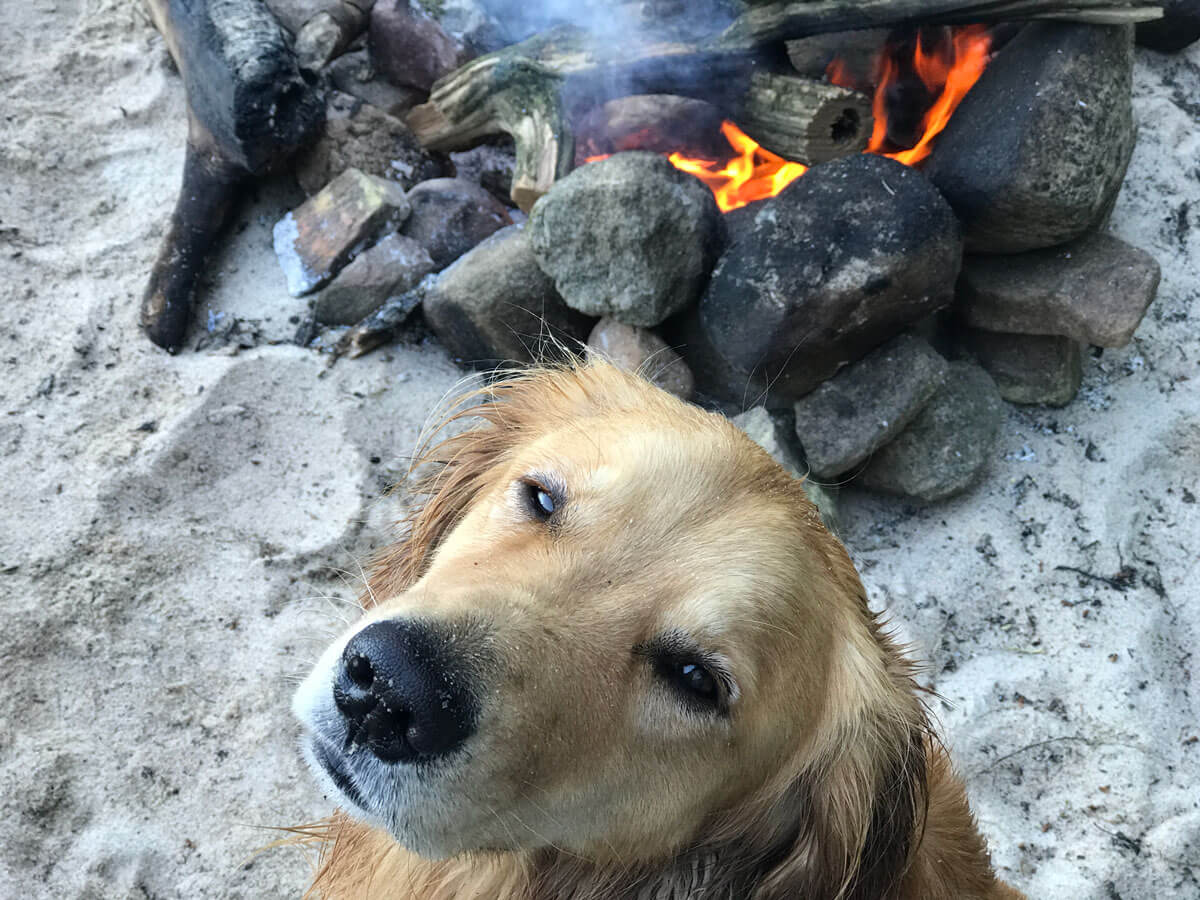 Maverick was pretty excited about the fire, and the cooking gear that came out soon after we got it started. He had already been swimming for hours as I was slaving away after beaching the plane. Maverick loved the cove because he could swim way out to either side exploring and still keep me in sight. It's not uncommon for Maverick to disappear in the woods for 45 minutes to an hour then come running back to camp. He does this stare off into the distance pose when he's asking for permission to go exploring. After holding that position for 60-90 seconds, he'll look back at me once and either wait for the nod or for me to call him back. 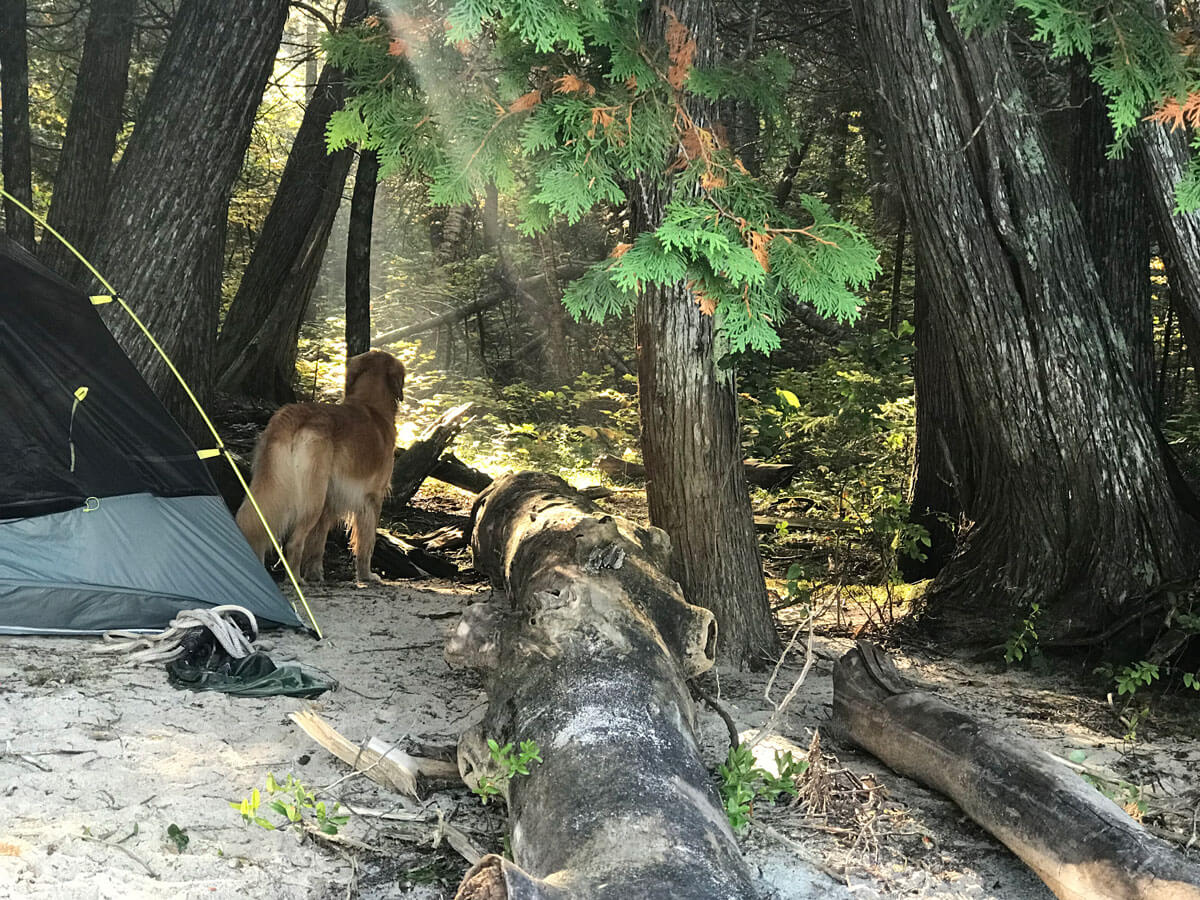 There's really nothing better than taking your dog camping and letting them swim and explore as they please. Not surprisingly, Maverick came running back to camp once he could smell that dinner was ready. The menu called for pad thai - or at least what I believe is pad thai. I absolutely love the taste of food out in the backcountry, something as small as a bit of salt and pepper can make you feel like you are at a gourmet restaurant. 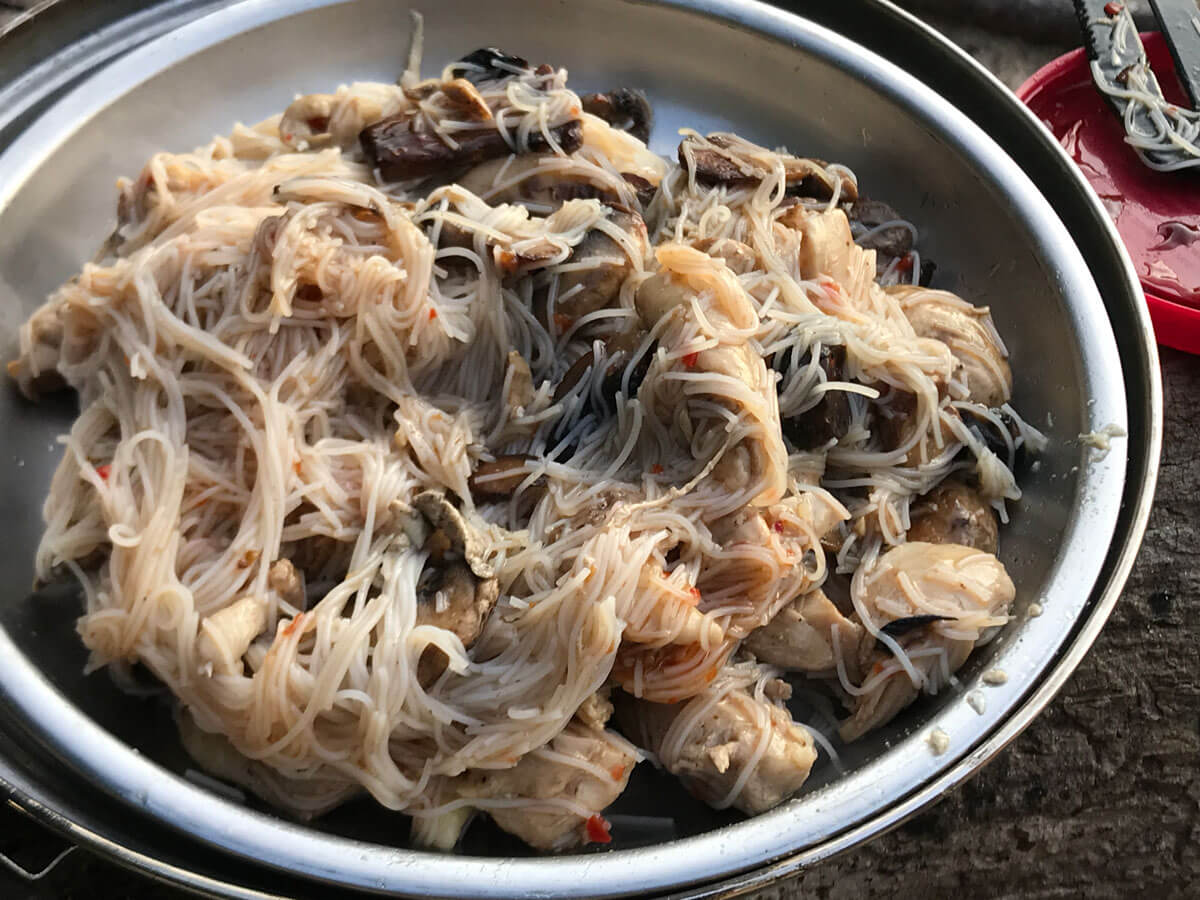 I wanted to get in some night photography but was extremely tired after dinner and just wanted to call it a day. I decided it might be wise to take a nap on the beach rather than in the tent if I wanted to get up in a couple hours. Even though it was still bright out, if I had gone for a nap in the tent I would have slept until morning. When I woke up, the sun had just set and the light from the sun was reaching from over the horizon to the underside of the clouds, creating a beautiful pink light. I was pretty happy with these photos and decided that I might as well get some sleep rather than wait for the stars to come out. Before going to bed, Maverick and I just sat by the fire staring into the flames reflecting back on the excitement of the day. At 5am this morning we were in the city, and 14 hours later we were out in the bush having a fire miles and miles away from any human. 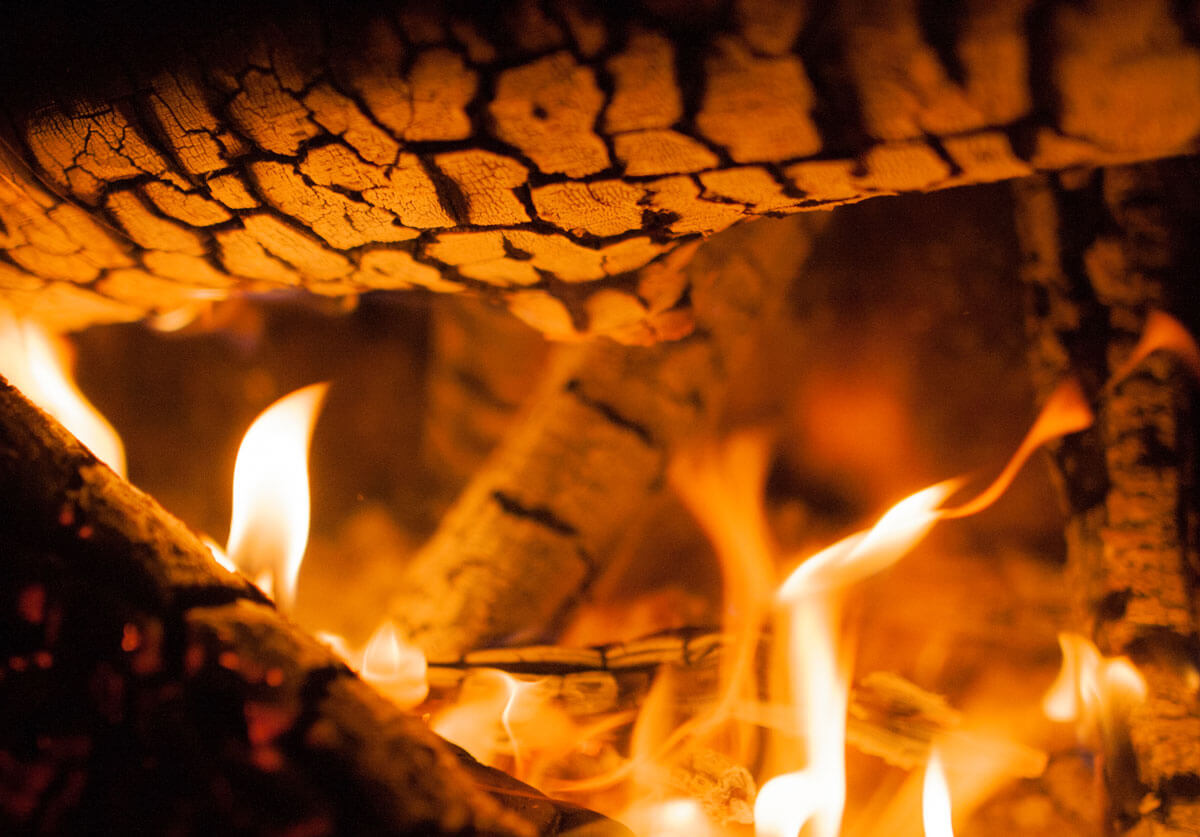 I woke up bright and early the next morning to a misty fog over the lake, and Maverick patiently waiting by the fire for breakfast. Clearly he had been enjoying his morning rolling in the sand. When you're camping out in the woods with a dog, you have to just accept the fact that your tent is going to be covered in dirt and sand. 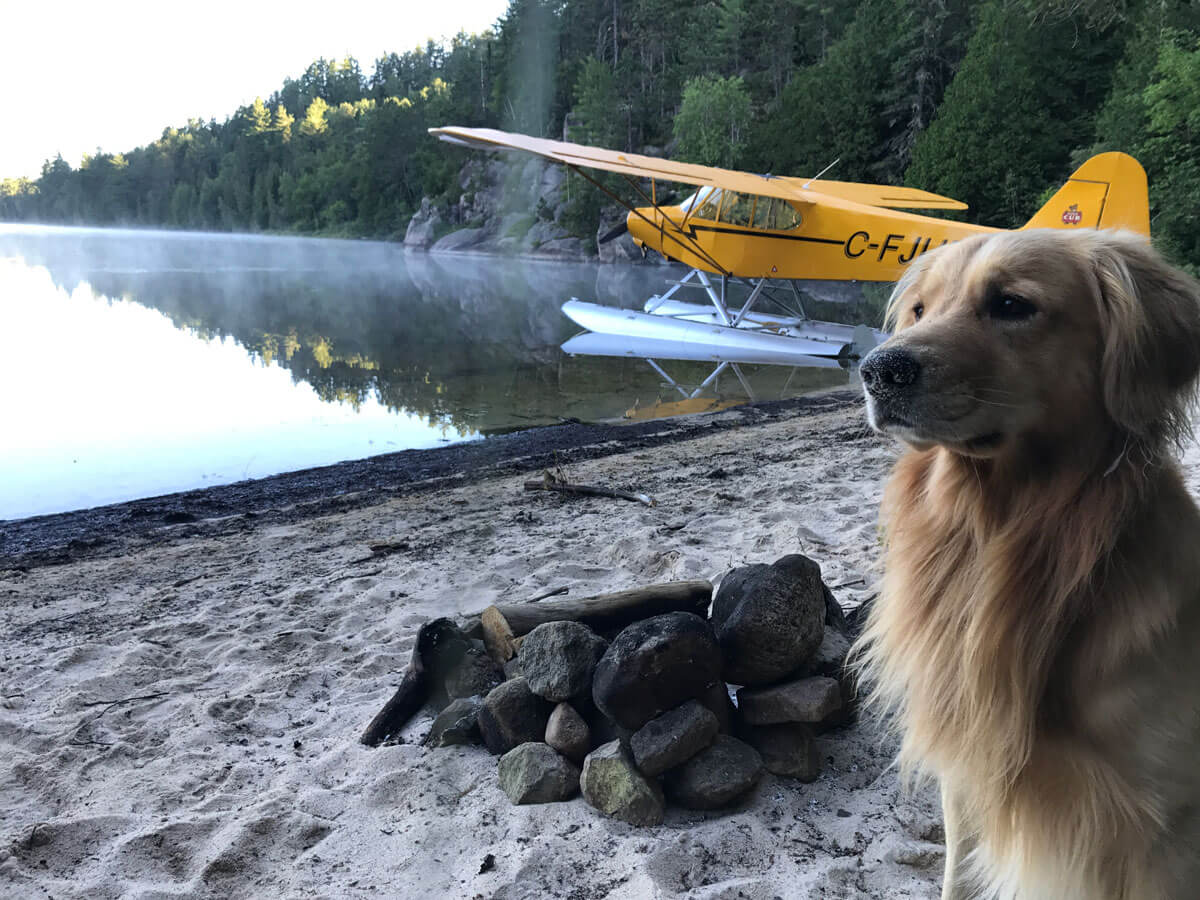 My go-to breakfast out in the woods is actually the same as my go-to breakfast every morning at home: bacon and eggs. On some special occasions I'll add hashbrowns if I have a spare potato at home before I head out. However, today was not one of those fortunate mornings. I know a lot of people debate whether to cook food over the fire or a stove while camping, but I always cook over the fire. I just love the taste of food cooked over the fire while out in the bush. It's a bit more difficult and it takes longer, but that's all part of the fun. I've definitely experienced those times where I had a poorly built fire ring and my grill falls into the fire along with all my food... it sucks. 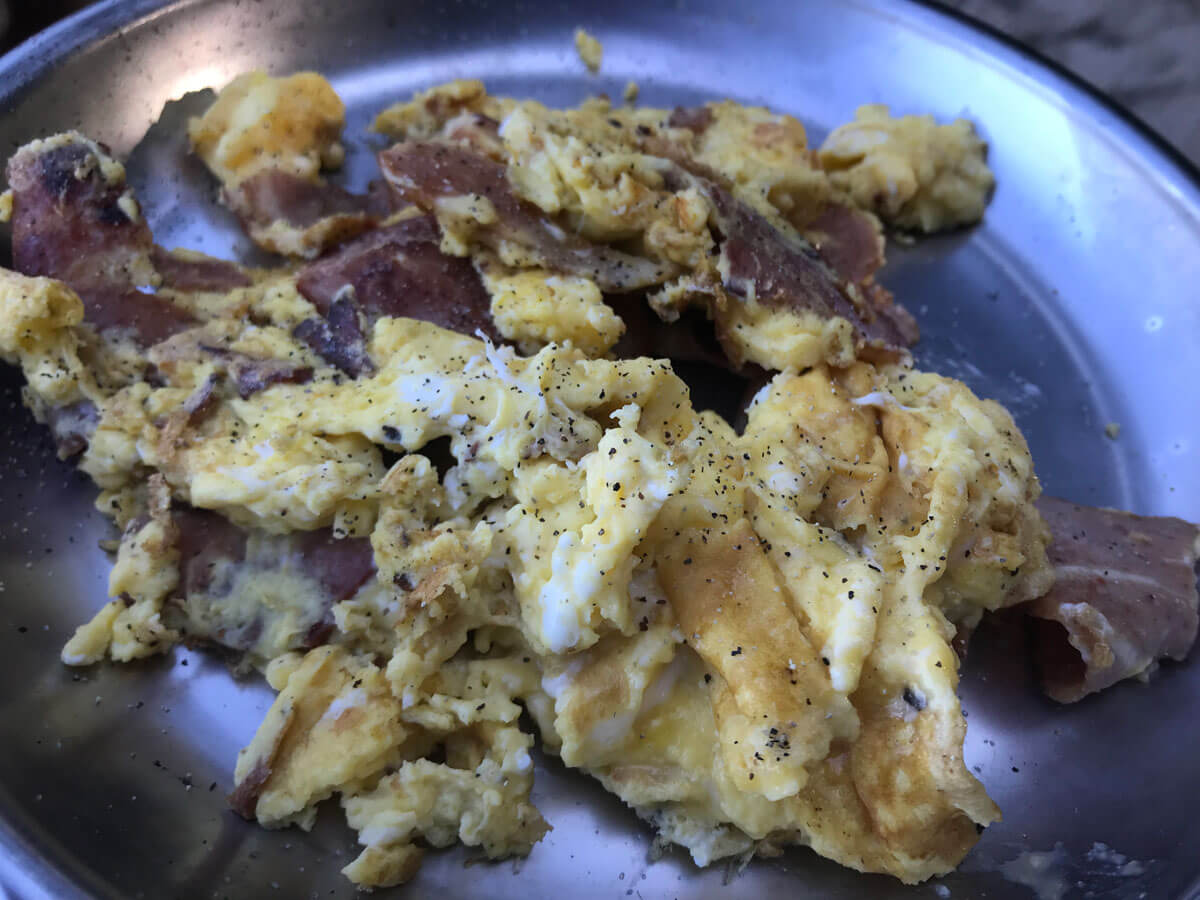 He trusted me to catch him as he knew even before he jumped that he would slip down and not be able to make it. Dogs are special animals.

As mentioned earlier, that wee bit of pepper on your food out in the bush just makes all the difference! I wanted to get some early morning fishing in but there was no boat at this spot, so I was stuck fishing from shore. I thought I'd try dropping my line in off a big rock face that was on the outer part of the cove. It wasn't exactly clear how easy it was going to be to get there, but I headed into the forest to try to find a way around on the other side of the beach. 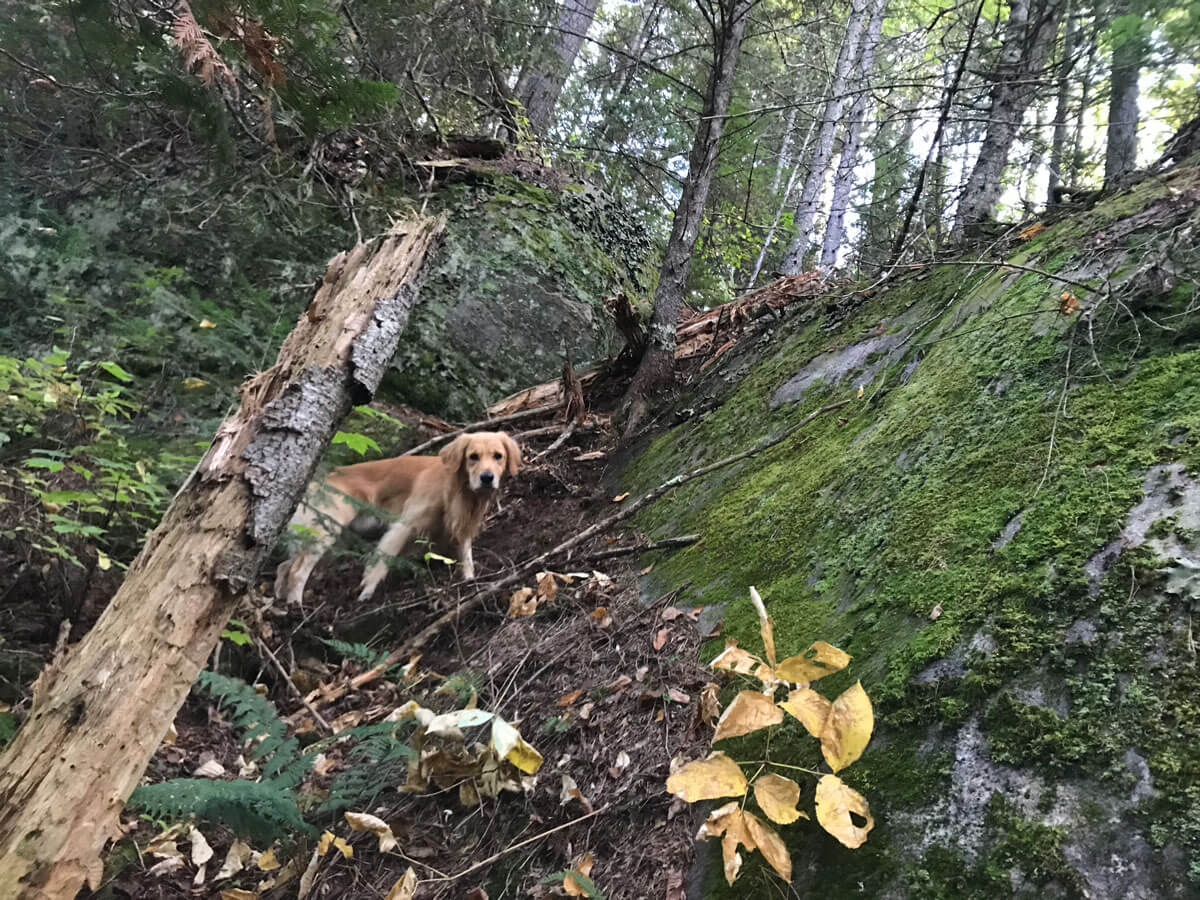 Maverick excitedly led the way when he saw me grabbing my fishing pole. He loves fishing and he knows exactly what it means when the fishing gear comes out. It ended up being quite the hike as we had to climb this really steep hill, which was no easy feat. Maverick couldn't get up on his own, he just kind of looked at me as if I was supposed to go up and then pull him up. Unbelievable!

That being said - that's exactly what I did. This was one of those moments that I often have when I realize just how smart dogs are and how good they are at problem solving. It turns out that he was able to jump up to the top of the hill, but he never attempted it because he had somehow worked out that he'd slide back down. He just gave me a please help me look and I knew what he wanted me to do.

So I struggled to climb up first and then looked back down at him as he prepared to jump. He made the jump, but then he started to slip downwards as I grabbed him and pulled him all the way up before he would have had a pretty substantial fall. He trusted me to catch him as he knew even before he jumped that he could almost make it but wouldn't be able to stay up without my help. Dogs truly are special animals and companions. 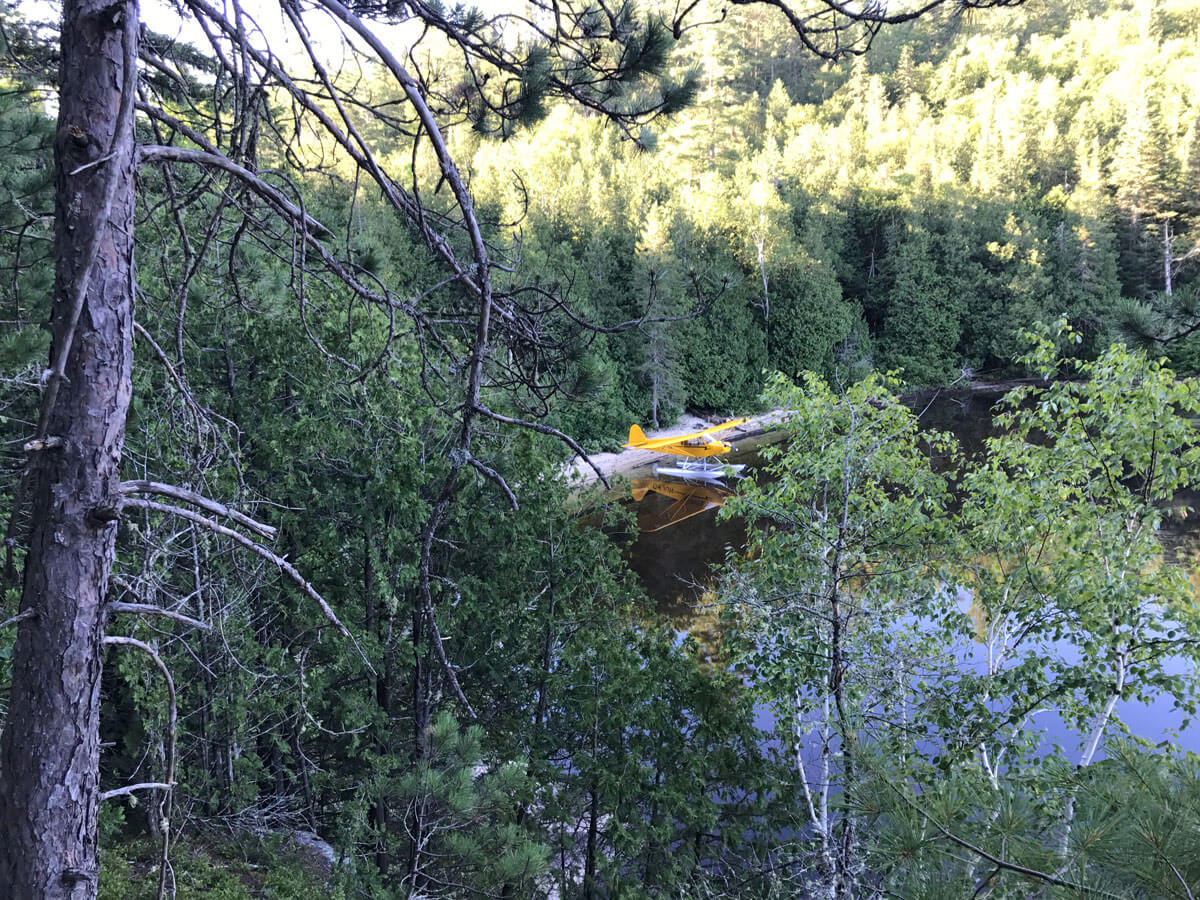 Once we were up the top of that cliff, we walked towards the end of the cove and were met with a breathtaking view of the cub with the early morning sun shining on the tree tops.

My next challenge was finding a way down the rock cliff. It was not a small cliff, and I didn't really want to fish from way up there. All the sudden I heard a big splash, and I turned to see Maverick in the water. I still don't know how he got down so easily! 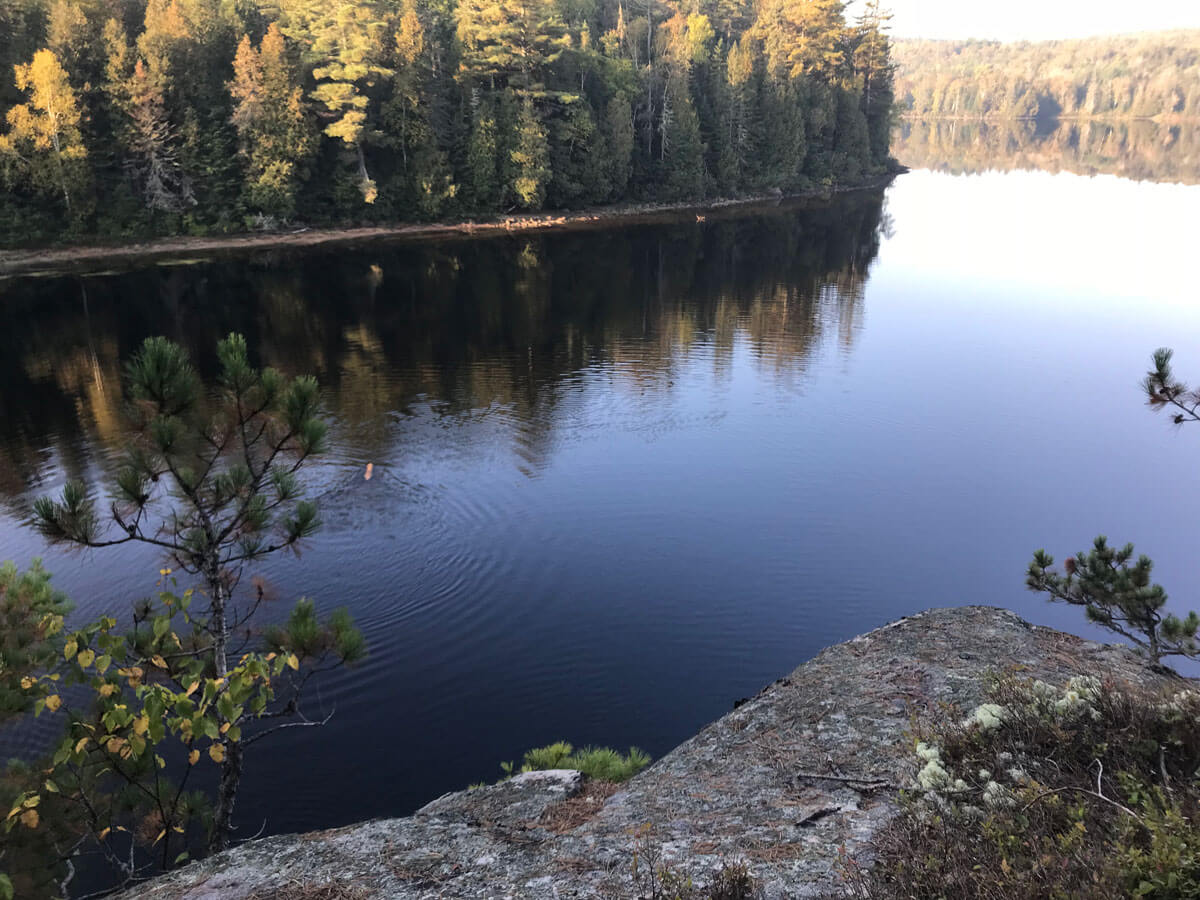 There is no stopping this dog from swimming. He's in the water 8 hours a day non-stop. I called him up and watched the path that he took to get back up to me. He had walked further out from the cove another 100 feet down and found a small path down to the base of the rock where there was a small ledge he could jump in. With the big rock cliff, it probably got deep pretty quick and seemed to have nice underwater structure for fish. It looked like this had the potential to be a great fishing hole. I had no idea what fish would be in the lake, my default assumption up north is typically walleye and pike. Once I got down to my fishing spot I put a jig on my line and threw it in. You don't have to be too picky about your bait when you are fishing in spots like these. I was there for maybe 5-6 casts and pulled out a nice walleye and catfish! 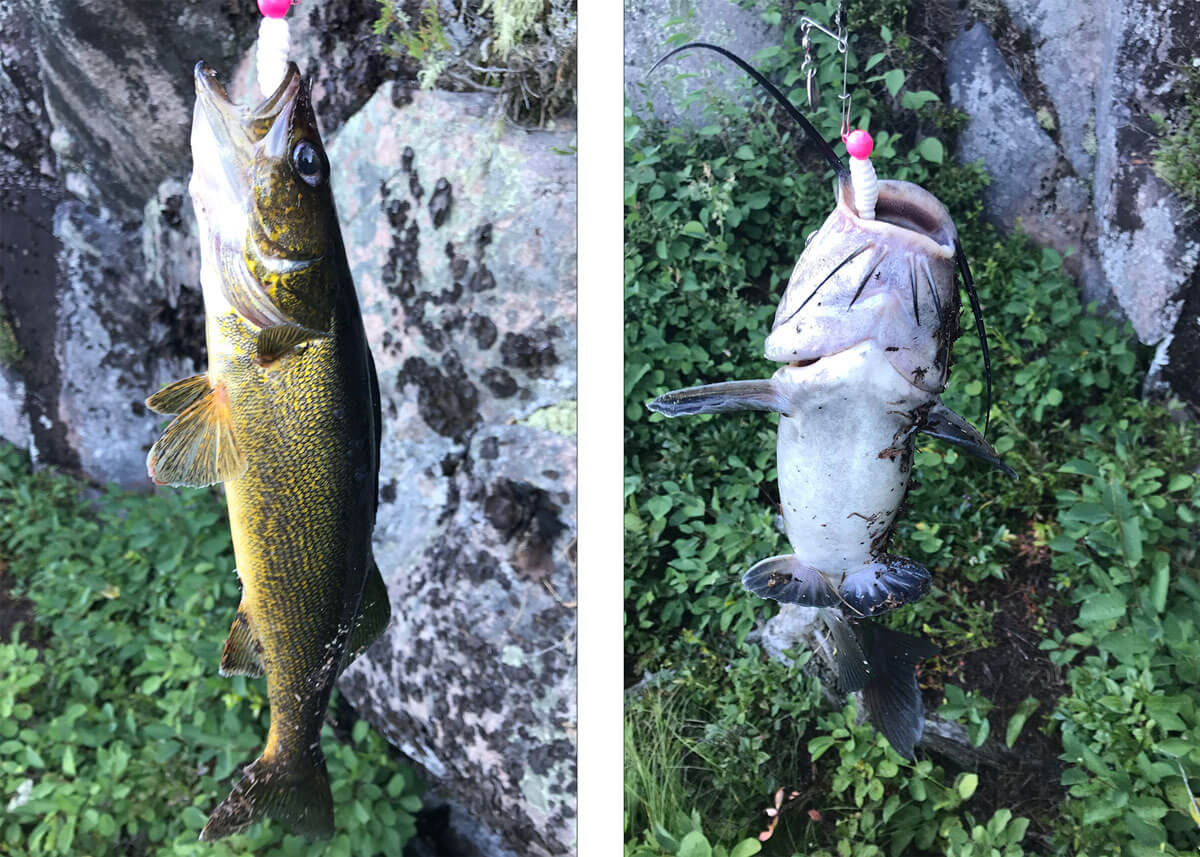 What a find this spot was! My mind was already rushing to the next time I'd be able to get out to this spot, and how I needed to figure out a way to get a boat to the spot. This camping spot had everything: a beach, nice and secure docking situation, great fishing, and most importantly it was fly-in access only.

I decided to share the walleye with Maverick before heading to the other side of the cove to explore. The view from there also provided a beautiful photo opportunity of the cub parked at the beach. 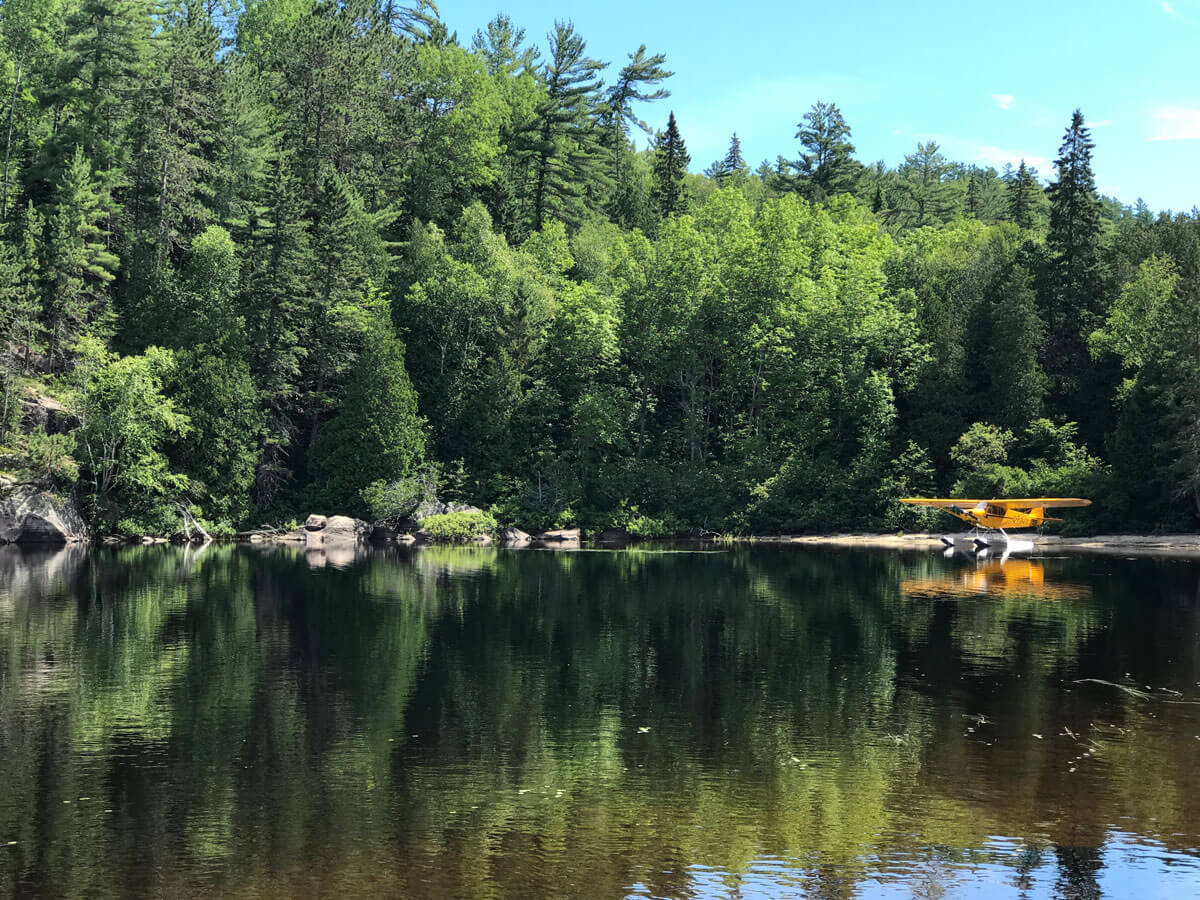 I absolutely love this photo! I was contacted on social media by a local artist named Jacqueline Gori, who offered to paint this picture for me. She's very talented and the final result was better than I could have imagined. 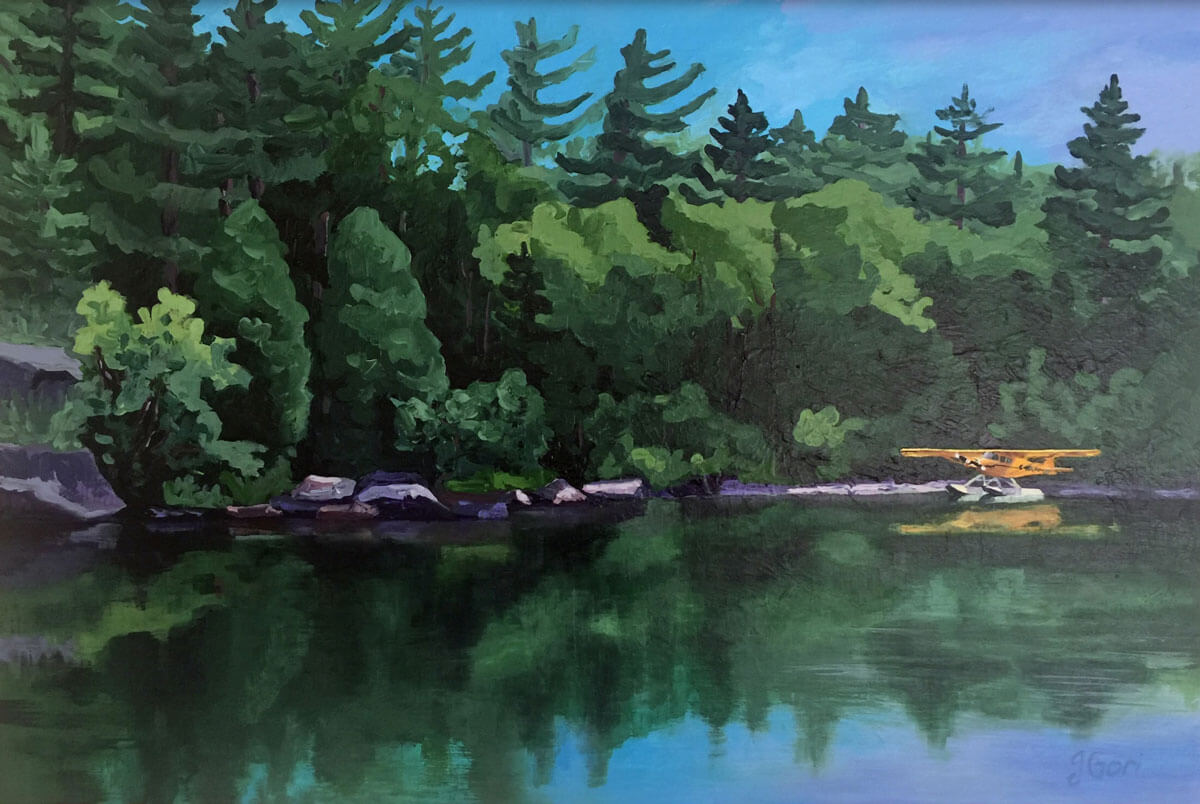 I then headed back to camp, grabbed my bow and arrow, and went stumping for the better part of the afternoon. Stumping is where you walk around a wooded area with a bow and arrow shooting at rotted out stumps, leaves, and other articles on the ground. It's how I spend a lot of my time out alone in the woods. Maverick loves it because he gets to run around in the forest while I shoot. After a couple hours of exploring the interior woods away from the beach, we came back for a swim and then were ready to start packing up to head home. 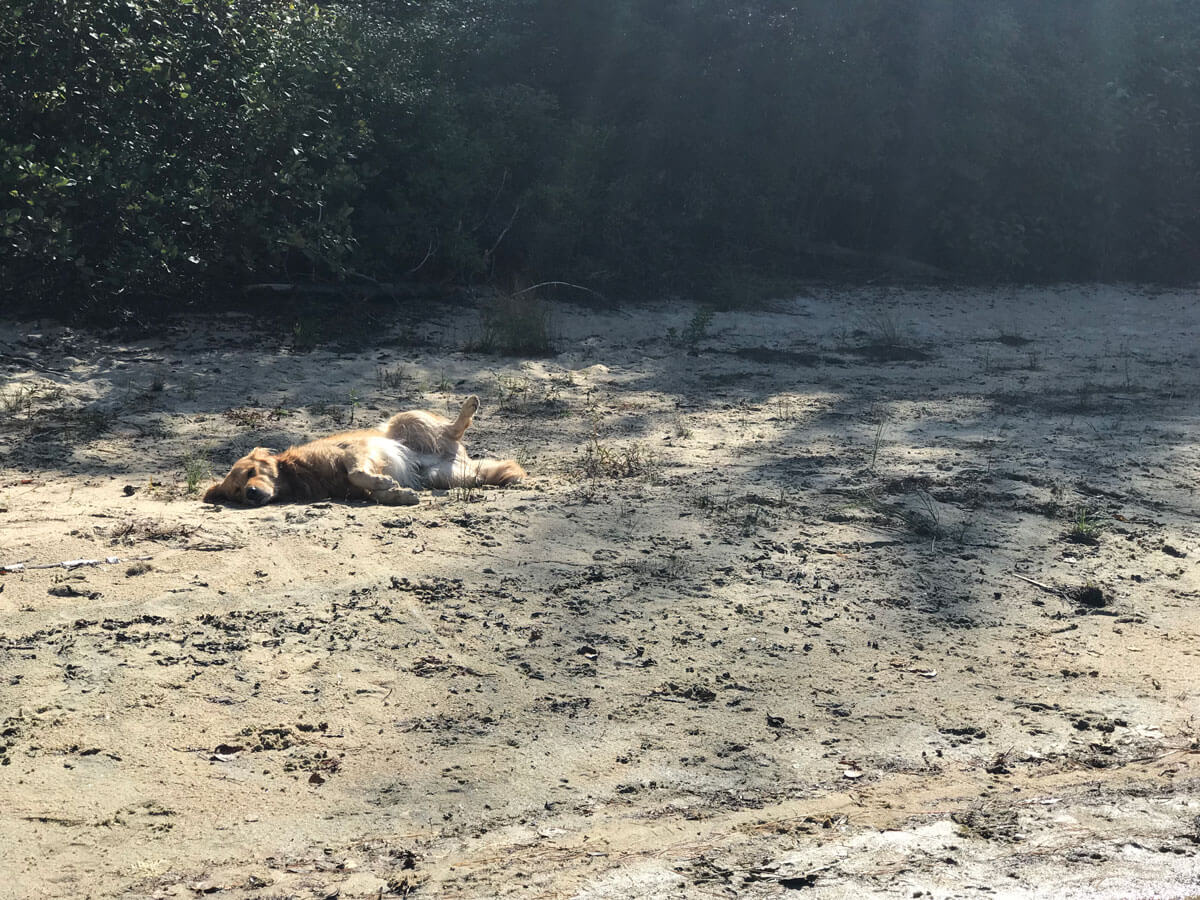 Maverick did not want to go... at all. I got this photo when I was finished packing the plane and Maverick was the only thing left to pack. He was extremely upset that we had to leave and he wanted absolutely no part of it. I couldn't convince him to come, even when I tried to go to pick him up he just rolled further onto his back so it was hard to get a hold of him.

Eventually, I got him into the plane and got his headset on and we were ready to go. He was definitely not impressed! He's got it pretty good though as the next weekend would bring a brand new adventure exploring other remote areas. However, this location is definitely saved on my list as a place to go back once I can get a boat there.

If you haven't read about my trip exploring to find this great camping spot, be sure to check it out!